Still No WH Tours, but Parade of Special Visitors Continues

The White House continues to bar average Americans from touring “The People House” but nevertheless lavishes spending on all sorts of special invitees – from diners at last week’s Iftar dinner breaking the Muslim fast to sports teams and foreign diplomats. 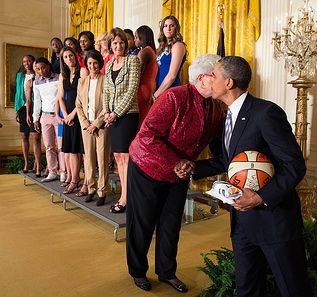 Soon after the outcry over the cancellation of tours due to the sequester, the White House promised to see what could be done to allow some visits to resume. But nothing was done and no one can visit – unless President Obama finds you useful or amusing.

Favored guest have poured in this month, even though Obama was traveling in Africa for part of it.

He even found room in the White House for a team that hasn’t won a game in 50 years – the 1963 Loyola University of Chicago Ramblers championship basketball team.

Meanwhile, he had some old buddies in for a July Fourth celebration. And Michelle staged a “Kids’ State Dinner” with dozens of children and their parents to promote her healthy eating initiative.

279 thoughts on “Still No WH Tours, but Parade of Special Visitors Continues”