The economy still barely growing, the world is in chaos, and the sequester is hampering government functioning, but one thing is rolling along more smoothly than ever: President Obama is on track this year to play a record number of rounds of golf.

Safely reelected, Obama is golfing like never before. He’s played in Hawaii with his buddies and in Florida with Tiger Woods. He roars out of the White House every weekend with a motorcade in tow to play at either Andrews Air Force Base or Fort Belvoir. Apologies, of course, to any service members who were planning a round. 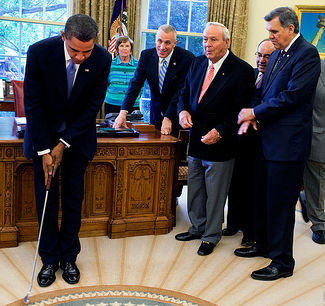 There’s no money for Secret Service agents to staff the White House tours, but there’s plenty to send them out to the links with Obama, week after week. As of the six-month point of the year on June 30, Obama had shot 18 rounds of golf, putting him on pace to play 36 times this year, which would be a new annual record.

The president’s standing mark is 34 outings, which he achieved in 2011. This was followed by a dismal 19 rounds last year, when Obama was consumed with something even more important than governing – getting reelected. Not only was time short for playing, but the campaign theme of a president who champions the struggling middle clase probably didn’t mesh well with the optics of a president constantly on the golf course.

And the president this year shows no sign of letting up. After playing nine weeks in a row, Obama was forced to break his streak the last weekend in June when his trip to Africa edged inconveniently into the weekend. But Friday, he was right back at it, hitting the links with a couple of friends who had flown into Washington to spend the Fourth of July holiday with their buddy the president.

July is high golf season for Obama, and he’s unlikely to miss a weekend. But August is coming, and then things will pick up even further. The, the customary Obama Martha’s Vineyard Golf Extravaganza will get underway, featuring presidential tee times about every other day of a vacation that could stretch for two weeks.

Meanwhile, White House Press Secretary Jay Carney was asked Monday if Obama had spoken with any of Egypt’s leaders since the coup.

“I don’t have any calls or communications that involve the President to read out to you,” he said.

40 thoughts on “Obama on Pace for Record Golf Year!”