The impeach Obama movement may be coming to an overpass near you.

A new activist group is attempting to launch summertime demonstrations across the country demanding that Congress act to impeach the president. The protests will feature groups of anti-Obama activists hanging banners across overpasses above the busiest highways they can find. 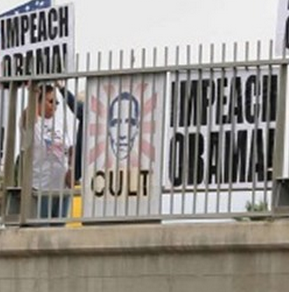 The newly formed Overpasses for Obama’s Impeachment – inspired by a June 8 Tea Party protest that snarled traffic in Carlsbad, California – plans to begin protests July 4, according to a report by Examiner.com. Organizers hope to organize wave of protests across the nation, dubbed “The Patriot Wave,” in the hope that it will catch the attention of Congress.

Founder James Neighbors told Examiner.com the justification for impeachment lies in the “simply astonishing” and growing list of scandals attached to the administration.

The organization is attracting members through a Facebook page founded earlier this month that has links to subsidiary Facebook groups in most states. While the main Facebook page already has about 2,500 “Likes,” many of the local groups appear to have only a few members and no local leaders at this point.