In the latest sign of the decline of the West, the G-8 leaders meeting in Northern Ireland this week decided to remove their ties and dress down in the manner of President Obama, who can frequently been seen in gym clothes, a golf shirt or whatever milling about the Oval Office.

Because why be so stuck up, right? They’re just a bunch of casual dudes and a gal workin’ in low-key fashion to make lives better for other regular peeps like themselves. 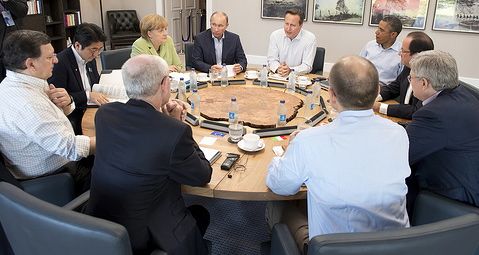 Are these people playing scrabble or discussing the future of the planet? I think Putin’s got a seven-letter word.

Only German Chancellor Angela Merkel, who perhaps not uncoincidentally may be the most successful leader of the bunch, has the sense to wear reasonably appropriate attire. Her usual getup, at least.

You think I’m kidding about all this, right?

Listen, I’m not a great dresser, believe me. And I just love, in the fashion of a blogger, to spend half the day wearing the most comfortable things possible. I’ll leave it at that.

Unless I have to be somewhere. And then I force myself to look like I know I should.

Because I do understand that casual dress inspires casual thinking. Like the kind of thinking this generation thinks.

My dad never walked around the house in jeans or shorts and a baseball cap. He wore slacks. At work, he wore a tie. Ronald Reagan rarely set foot in the Oval Office without a jacket and tie, and once ensconced there, never took it off.

Today’s American men and their European counterparts have infantilized themselves beyond repair: negotiating with their children instead of telling them what to do; playing video games with other grown men on the Internet; and wearing reversed baseball caps with the emblems of their favorite sports teams like teenagers just out of their acne faces.

If you think men today are irresponsible, self indulgent children who let the door close in women’s faces, then look no further than their sartorial ineptitude to figure out why.

Obama, like Bill Clinton before him, shows all the signs of sloppy thinking and arrested development. And his policies, disastrous on both the foreign and domestic fronts, reflect it. His main agenda item every week seems to be to get out on the golf course with his regular crew of twenty and thirty something junior White House staffers and wisecrack his way through 18 holes.

He even got Chinese President Xi Jinping to go Obama Casual at their recent meetings in California. 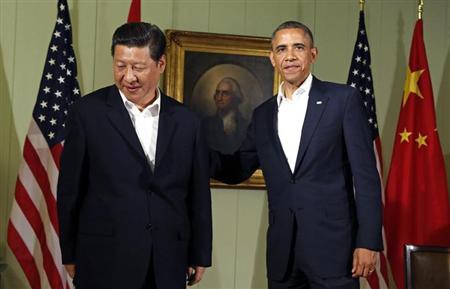 I assure you, the Chinese president was just humoring our guy. The moment Xi got back on his plane he strapped on his tie and got back to work on plans to kick our Western butts.

Here’s another photo of the guardians of Western culture. 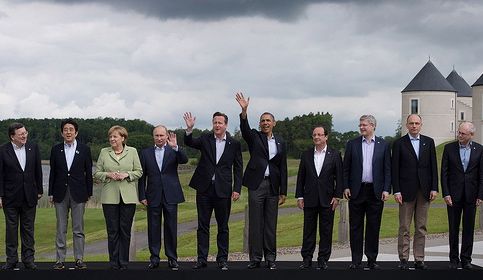 There they are, led by Obama, waving goodbye to their hegemony. Because you can’t run the world dressed like it’s causal Friday.

10:00 am| Receives the Presidential Daily Brief