The kerfuffle over House Oversight Committee Chairman Darrell Issa’s calling White House Press Secretary Jay Carney a liar is nothing compared to the ugly Chicago, Alinskyite politics that reared its head in response.

The very president who was supposed to be above something as pedestrian as politics has shown once again that he is in fact the ugliest practitioner of it since Richard Nixon. 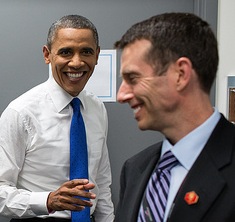 Plouffe’s slimy remark refers to dropped charges against Issa in the 1970s that he and his brother stole a car, and the claim of a former owner of one of Issa’s companies that Issa had intentionally burned it down. Issa was never charged with wrongdoing in the latter case. But that’s of no concern to the White House.

Plouffe, after having spearheaded the 2008 campaign and then served as Obama’s senior advisor in the White House, is today a private citizen. But thinking of him as apart from Obama’s orbit is like saying your brother’s out of the family because he went to college.

Like the Clintonites before them, the Obama White House uses outside advisors as attack dogs to keep itself looking clean. Carney Monday refused to comment on Plouffe’s remarks, as if they had originated from Mars.

But unlike other outside hit men, Plouffe is really something different.

Once in late 2009, in the White House press office, I looked up at the TV and saw a report on something controversial that was in a book just published by Plouffe, “The Audacity to Win.” I glanced over at couple of Obama press aides and said, “Is the rabbi going to be happy?” referring to Obama.

They laughed. One of them said, “He is the rabbi,” referring to Plouffe.

Plouffe is not just some former paid hack. He has served at the right hand of the president of the United States, and perhaps more than anyone is responsible for Obama getting to the Oval Office in the first place.

Given the power Plouffe wielded and probably continues to wield – who in the White House, including the president, would refuse his phone call? – the notion that he will be engaged in sordid personal attacks should be pretty disconcerting.

It’s reasonable to conclude that Ploufffe doesn’t do things that won’t be well received in the White House, and that many things he does might even have been run up the West Wing flagpole first.

This is effectively Obama roughing up his chief antagonist on Capitol Hill in the most coarse and malignant manner. It’s a sure signal to other White House allies, on Capitol Hill and elsewhere, to begin trying to destroy Issa.

And it’s a desecration of Obama’s office. Then again, that’s nothing much new.

But more interestingly, it may be a sign that the White House is much more gravely concerned about Issa than it lets on.

47 Responses to Plouffe Suggests Issa May be a Criminal