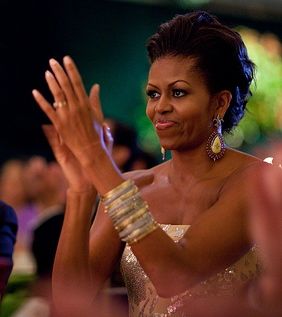 At the luxurious Manhattan pad of fashion designer Tory Burch, Michelle drummed up at least a half a million dollars – and probably much more – from 100 guests who paid between $5,000 and $25,000 to attend.

Meanwhile, President Obama was alone at his big house in Chicago following his own day of fundraising for House Democrats.

Michelle spoke to the wealthy designers as if addressing a band of sisters.

“This is a special event because there are a lot of people who have touched my life in so many important ways, who have helped me become the poised and stylish woman that I am,” the First Lady said, provoking laughs from the audience. “So, I want to thank all of you. I want to thank Tory.”

The event was the second of the day in a first lady fundraising blitz. Michelle had just flown in from Boston, where she hosted a fundraiser for Massachusetts Democratic senate candidate Rep. Ed Markey that was expected to raise at least $600,000.

Following the event at Burch’s apartment, Michelle headed to another Manhattan fundraiser for the DNC, an “LGBT Gala” that also included a hundred people paying $5,000-$25,000 per ticket. Michelle was introduced by Jason Collins, the Washington Wizards center who recently came out as the nation’s first openly gay major professional sports player.

160 Responses to Michelle Hobnobs with the Fashion Elite