Democrats and the White House are deriding the Benghazi investigations as a witch hunt. And the chief “witch” in Republicans’ crosshairs, they say, is Hillary Clinton. I’ve even heard supposedly neutral journalists say the idea here from the GOP is to go after Hillary and soften her up for 2016.

If only Republicans were that sophisticated in their political approach and could think so far ahead.

Sure, there’s politics involved. It’s Washington. But there’s also genuine outrage and serious issues of concern. Hillary has indeed come under fire, mainly for incompetence and potentially for following political impulses in her response to Benghazi, a terrorist attack lodged after al Qaeda was supposed to have been defeated.

But the Hillary’s most frightening outrage has largely been glossed over. 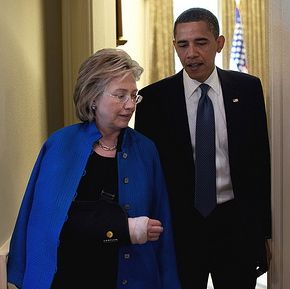 According to the father of one of the Navy SEALs killed while trying to defend our people, Hillary told him, “We’re going to go out and we’re going to prosecute the person that made that video.”

This is – particularly for someone who has been in public life for more than three decades, served as first lady, as a United States senator and as Secretary of State, and who likely still wants to be president – completely unfathomable.

The person, Nakoula Basseley Nakoula, was indeed arrested and prosecuted for violating the terms of his probation for a previous crime. He was thrown into jail just 16 days after the Benghazi attack.

The problem here is not that Nakoula was prosecuted for violating his probation. The problem is that it appears his case was dusted off and acted on in response to pressure from the Obama administration to punish him for making a reprensible anti-Islamic video that caused people overseas who do not share our values to throw conniptions.

Hillary’s comment, which I have not seen rebutted, draws a direct link between the new prosecution of Nakoula and the Obama administration.

Not everyone who breaks the law – including violating the terms of their probation – gets prosecuted. With finite resources, prosecutors make decisions all the time about whom to go after and when.

There is now every reason to believe that the government pursued Nakoula because the administration wanted him jailed for making a video.

He may eventually have been prosecuted anyway. But he most likely went to jail on September 27 because the Obama administration, and in particular Hillary Clinton, was unhappy about his exercise of free speech.

There is no more paramount ideal in the country, no more sacrosanct principle, than freedom of speech. It’s what we do here. Neither race, ethnicity nor religion – nor even shared history – define the United States. Principles do. And Freedom of Speech is Principle #1.

As has been said, we have freedom of speech not to protect innocuous comments. It’s there to safeguard us when we say something outrageous.

Of course, if Hillary wanted to go after Nakoula, it’s fair to assume the current president did too.

Congress should immediately open an investigation into the circumstances of Nakoula’s prosecution and jailing. They must determine whether the White House or anyone else pressured prosecutors to act. And anyone who did so must be held to account.