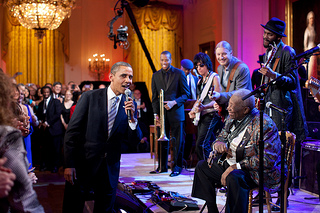 While the performances are televised and celebrate the nation’s culture, some may wonder whether during an era of soaring deficits it is wise to stage what are also in effect private parties for the first couple.

And with this evening’s event, the performances are officially part of the “sequester-free zone” at the White House. As is well known, the daily White House tours did not make the cut.

The Obamas suspended the performances during the campaign season, either because they were too busy or because they thought average voters might not be pleased by the sight of them partying it up as unemployment continues to rage. The last “In Performance at the White House” was a May 8, 2012 event celebrating of the music of Burt Bacharach and Hal David. The show included performance by Sheryl Crow, Mike Myers and Stevie Wonder.

Tonight’s extravaganza will feature Justin Timberlake, Queen Latifah, and Cyndi Lauper along with a cadre of old blues and soul stars.

Other White House performances have centered on the blues, country music, jazz, and Motown and have featured megastars like Mick Jagger, Paul McCartney, B.B. King, and James Taylor.

261 Responses to Tonight Marks Tenth “Command Performance” for the Obamas