The tours for the public may be canceled, but the fun continues at the White House, where President Obama and First Lady Michelle are indulging in exclusive entertainment even as furloughs begin to hit the White House itself. 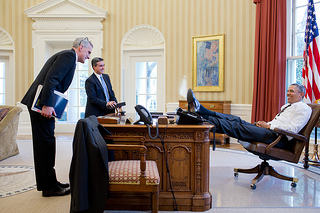 Tuesday evening, the Obamas were treated to a viewing of the movie “42,” which chronicles the life of Jackie Robinson, watching it in the White House theater with the film’s cast and crew in attendance. Earlier, in the day, the White House added an official gloss to the event by throwing in a “42 Film Workshop” for kids in the State Dining Room featuring Harrison Ford and Jackie Robinson’s widow, Rachel Robinson.

And next Tuesday, the Obamas will be seated in the East Room for a command performance “celebrating” Memphis soul music, an event will feature megastars Justin Timberlake and Queen Latifah.

The president hasn’t let the sequester interfere with his entertainment on the links either, resuming his regular golf game last weekend with a round at the Joint Base Andrews course.

And the Obamas each already have had two vacations this year. Meanwhile, the Office of Management and Budget, a wing of the White House, will soon start furloughing employees.

Sequesters, it would seem, are for little people.