Biden to Take Third Vacation of the Year

Vice President Biden today is enjoying his third vacation of the year, a five day sojourn on South Carolina’s luxurious Kiawah Island, where he will no doubt partake of his favorite pastime, golf.

Biden and his wife Jill arrived on the island – known as a golf mecca – Thursday night and are not scheduled to depart before Monday. 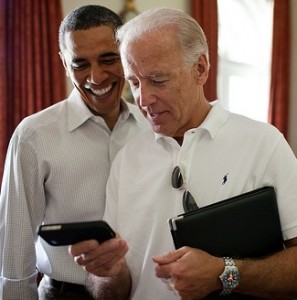 Biden’s trip is the latest episode in a bout of rampant vacationing by the First and Second Families, who have been roaring out of Washington this year on taxpayer-funded excursions even as the deficit mounts and the sequester axes jobs and critical spending on other priorities.

While both President Obama and Biden pick up some of the tab for their recreational travel, the bulk of the costs –  including flights aboard Air Force One and Air Force Two and security and staff needs – are billed to taxpayers.

Biden should feel especially refreshed when he returns given that he just had a vacation last month in Snowmass, Colorado, where he spent several days over President’s Day weekend. Close by in a neighboring section of Colorado’s ski country was First Lady Michelle Obama, who was taking her second vacation of the year in Aspen.

Over the same President’s Day weekend, President Obama was roving the fairways at an exclusive golf resort in Florida where he got pointers both from Tiger Woods and Tiger’s famous former coach. He and Mrs. Obama had already spent part of late December and early January in Hawaii.

Biden’s first trip this year was a sun worshiping exercise in the U.S. Virgin Islands, where he stayed with his family from Friday, January 4 until Tuesday, January 8.

South Carolina is also a crucial presidential primary state that Biden – believed to be strongly considering a run in 2016 – no doubt has his eye on. Biden reportedly will be back in the state in May when he headlines the annual Jefferson Jackson Dinner, a Democratic fundraising event in the state’s capital, Columbia.

But while his presence in South Carolina over the next few days will generate some local publicity, Biden is sticking to rest and relaxation and has no public events scheduled.

391 thoughts on “Biden to Take Third Vacation of the Year”