President Obama today played golf with Tiger Woods and caused an uproar in the White House press corps when a reporter who covers golf somehow got access to the round but the regular White House reporters did not.

Golf World/Golf Digest Senior Writer Tim Rosaforte was inside the Floridian, the golf resort where Obama is vacationing and playing, when Obama and Woods teed off. He broke the story by tweeting out his observations: 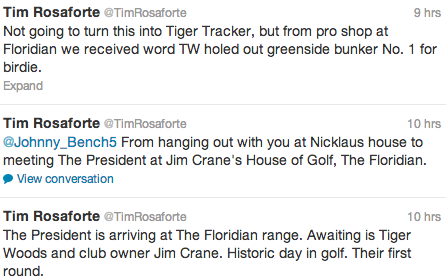 Well, lemme tell you, there’s nothing more aggrieved than a reporter who thinks someone else is getting delivered some story he ain’t getting. The White House press corps erupted.

From the press pool report:

“Speaking on behalf of the White House Correspondents Association, I can say a broad cross section of our members from print, radio, online and TV have today expressed extreme frustration to me about having absolutely no access to the President of the United States this entire weekend. There is a very simple but important principle we will continue to fight for today and in the days ahead: transparency.”

I have to say, I’m all about transparency and accountability. That’s why I do this website. But I’m not sure I get where the threat to The Republic resides in not having the press see Obama in the presence of Tiger Woods.

My suspicion is that the grave concern about “access to the President of the United States this entire weekend” began when someone else got the story, someone not a member of the White House press corps. There are plenty of weekends when no reporter gets access to the president, and the world remains firmly its access and nobody among the Fourth Estate complains.

From what I know right now, I’m siding with Josh Earnest on this one.

Today marks the fourth time Obama has played the fairways this year and the 115th time of his presidency.