Marco Rubio All Set to Pander to Latinos

He’ll deliver it in both English and Spanish.

Despite the prevalence of such options when you call your cable company or your bank, THIS IS NOT A BILINGUAL COUNTRY. 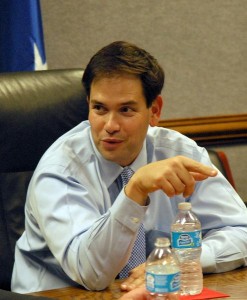 If Rubio and Republicans think are going to win Hispanic votes by sucking up with a little Spanish, they’re deluding themselves.

People, particularly people from cultures like those of Latin America, where machismo is serious business, are smart enough to know when they are being pandered to. And pandering, they know, is condescension.

Even worse, accommodating a failure to learn English by speaking to Latino immigrants in their native language is a setback for Latinos. Because to succeed in this nation, they need to learn English.

I’m actually impressed that Obama never tries to offer up some mangled Spanish just to be pleasing. Unlike George W. Bush, who routinely blurted out his lousy rendition of the language. Not that his English was much better.

This is a nation built on Western European, largely Christian values – I’m Jewish, but I know the phrase Judeo-Christian values is largely a concoction created just to be nice. Uniquely, our nation is also infused and strengthened by values and ideas brought here by other cultures, including those of Latin America.

But this is not Latin America. This is America, and that’s why America is light years ahead of Latin America, which is comprised of countries in various states of systemic failure.

To succeed here, Latin Americans must adopt the values of their adopted nation. And nothing is more of a cornerstone of a culture, nothing a better portal to its ways, than the language.

Mr. Rubio can be an inspiration to Hispanics just by being Mr. Rubio, a son of Cuban immigrants who speaks the English language beautifully and who has achieved sublime success in his family’s new land.

He should bring conservative values to Hispanics by stating them firmly and with his typical eloquence.

And in English, por favor.

48 thoughts on “Marco Rubio All Set to Pander to Latinos”