First Lady Michelle Obama appears to have abandoned, at least for now, her oft-criticized “Let’s Move” initiative to promote exercise and healthy eating among the nation’s youth, halting public appearances and statements related to the program. 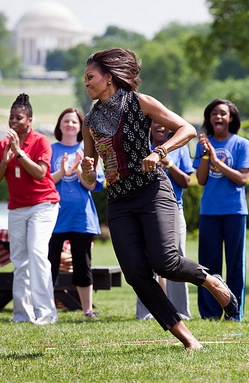 Mrs. Obama does not appear to have done anything much to personally publicize the initiative in more than four months – since she released a video in early September welcoming children back to school and telling them about the “healthy, delicious new choices” on school lunch menus. In August she had a “Kids’ State Dinner” at the White House to showcase healthy eating.

Michelle’s exit from the Let’s Move campaign coincided with growing reports and a widely circulated satirical video alleging that the new food guidelines were leaving children hungry. The bad publicity clashed with President Obama’s efforts to stir support among young voters for his candidacy. Many of Obama’s campaign events were held at high schools – presumably among students who might have been attending rallies on relatively empty stomachs.

But the Left also had unkind words for Mrs. Obama’s initiatives, accusing her of focusing on exercise while failing to aggressively take on the powerful food industry.

Political contributions may also have influenced Michelle’s decision to back off.

According to the latest tallies at Opensecrets.org, the food industry contributed millions during the last election cycle to various political campaigns. In the presidential contest, Mitt Romney took about $2.1 million from the industry, while Obama received a little less than $1 million.

Since the election, Michelle has not revived her participation in the Let’s Move campaign. Nevertheless, the White House website devoted to the initiative continues to operate, though blog posts on the site are written less frequently than before.