Long term unemployment under President Obama is at the highest level since at least the end of World War II, threatening to create a permanent underclass of workers who will find it difficult or impossible to obtain jobs in the future. What’s more, Obama’s insistence on repeatedly extending long term unemployment benefits may be fueling the unemployment problem.

According to data recently released by the St. Louis Federal Reserve, the average duration of unemployment is now at about 40 weeks, double the previous highest level of about 20 weeks that prevailed during the last three recessions. 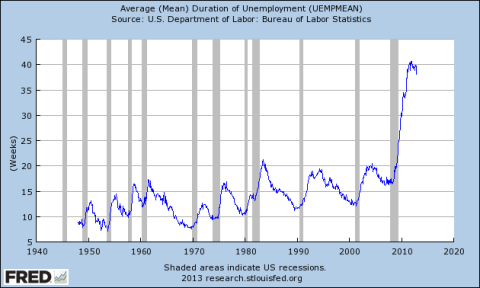 A separate paper released by the Boston Federal Reserve paints a pernicious picture of the problem: Employers seem to be throwing out the resumes of the long-term unemployed and only hiring those who have been without a job for less than six months. Meanwhile, with the guarantee of benefits rolling in, the long term jobless might not be looking aggressively enough for work, the paper states.

This suggests those who just had their unemployment benefits renewed for another year under this month’s fiscal cliff deal may need the benefits renewed again next year. And since the failure to get jobs is related solely to the length of unemployment – age, education and worker type do not seem to be a factor – Obama’s ambitious plans for funding worker training programs may have little effect.

Since 2008, Congress has voted to extend unemployment benefits ten times at a cost of more than $500 billion. The latest extension raised federal spending by $30 billion.

H/T to Doug Ross @ Journal and Matthew O’Brien at The Atlantic.

204 thoughts on “Long Term Unemployment at Highest Level Since WWII”