President Obama took a moment out of his vacation to try to sooth New Jersey Gov. Chris Christie, who is having a conniption over the failure of House Republicans to move a Hurricane Sandy relief bill.

Christie, who talked to the vacationing Obama by phone, had said not approving the Senate pass bill was “disgusting” and “disgraceful,” but House Republicans say they were reluctant to vote on it because the Senate had larded the measure up with money unrelated to the hurricane.

Christie, who is showing a marked appetite for self-indulgence, has been distancing himself from Republicans as he gears up for a reelection campaign in the blue state. Just before Election Day, Christie offered up serial rhetorical man-hugs for the Democratic president for playing nice with New Jersey in the aftermath of the hurricane, providing Obama with critical support as the campaign came to a close.

Here’s a photo of the cute couple as they surveyed storm damage together. 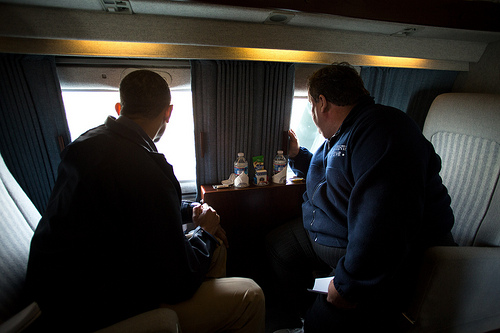 Having Christie slam the GOP also works nicely for Obama, since he will be spending the next two years trying to paint Republicans as a vicious band of hoodlums whowant to arm children with AK-47s and hope to ship all of America’s Latinos to Mexico. If Christie thinks House Republicans are a bunch of jerks too, it makes Obama’s storyline more credible.