Michelle to Remain in Hawaii, Costing Taxpayers Over $100K

President Obama will return to Washington from Hawaii Thursday while First Lady Michelle Obama and her daughters plan to continue their vacation, adding at least $100,000 and probably more than $200,000 to taxpayer costs for the excursion.

Instead of accompanying her husband home on Air Force One, Mrs. Obama will fly on her own Air Force jet at a later date and require security and staff to remain in place in Hawaii for the length of her stay, which reportedly could extend until January 6. 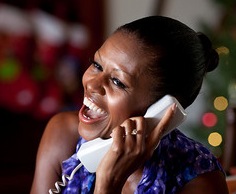 The White House does not reveal the price tag for the Obamas’ vacations. But an estimate can be made given several known and likely expenses.

Assuming Mrs. Obama uses the type of plane she has flown before to Hawaii, the Air Force C-40B Special Mission Aircraft, the cost of a flight from Honolulu to Washington would be about $63,000. If the C-40B must be flown out to Hawaii to retrieve Mrs. Obama, as would seem likely, the first lady’s travel costs could amount to about $126,000, assuming the jet is dispatched from Washington.

And the cost would be much higher still if a supply-carrying cargo jet comes home along with Michelle in addition to the cargo jet that accompanies Air Force One – particularly if that jet too must be flown out to Hawaii just for Mrs. Obama.

Once you throw in the tens of thousands of dollars that must be dished out to house, pay, and support the military and Secret Service assets enlisted to protect Mrs. Obama – as well as other support staff – the price tag for her stay is probably in excess of $200,000, and possibly much more, depending on how long she remains on vacation.

Mrs. Obama flew to Hawaii separately from the president in 2010 and 2011, in those cases leaving early with the family while he finished work with Congress and then joined them for the remainder of the vacation.

If Obama strikes an early deal on the fiscal cliff and then returns to Hawaii to finish up his vacation, the tab for taxpayers would be extraordinary. Air Force One costs about $180,000 an hour to fly, and the roundtrip taxpayer-funded ticket for the nine-hour flight would amount to about $3.24 million.

Obama plans to fly out of Hawaii Wednesday night at about 10:00 pm local time, which would get him to the White House at around 12:30 pm ET on Thursday.

462 thoughts on “Michelle to Remain in Hawaii, Costing Taxpayers Over $100K”