Mitt Romney has chosen Wisconsin Rep. Paul Ryan to be his running mate and will announce his selection with Ryan by his side at 9:00 am Saturday morning in Norfolk, Virginia.

Multiple news outlets, including the Associated Press and NBC News, were reporting as of 1:30 am Saturday morning that the choice is Ryan.

In a tribute to Ryan’s home state, the Republican ticket will appear at Norfolk’s Nauticus Museum, where the USS Wisconsin is berthed. 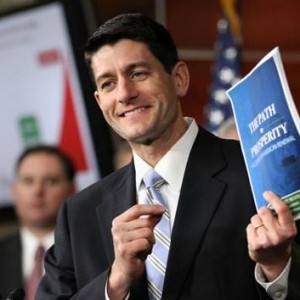 The presidential campaign is now a contest between conservative and liberal principles, with Romney having signalled with Ryan that he will oppose President Obama’s liberal agenda with a clear conservative alternative.

Ryan, 42, is certain to stir enthusiasm among conservative voters who have been suspicious of Romney’s commitment to their principles. But he will also present an inviting target to Democrats, who have already run a commercial depicting someone who looked a lot like the Congressman dumping an old lady in a wheelchair off a cliff.

Ryan has been an intrepid leader among Republicans in the House on issues like balancing the budget and reforming Social Security and Medicare, taking tough positions that make him a lightening rod for criticism that he wants to harm the beneficiaries of government spending.

But with the deficit running at more than $1 trillion per year, Romney has calculated that Republicans are well positioned to blunt the criticism and can convince voters that adult supervision needs to be brought in to Washington.

Here’s some biographical information via Wikipedia:

Born and raised in Janesville, Wisconsin, Ryan graduated from Miami University in Ohio. In the mid to late 1990s, he worked as an aide to United States Senator Bob Kasten, as legislative director for Senator Sam Brownback of Kansas, and as a speechwriter for former U.S. Representative and 1996 Republican vice presidential nominee Jack Kemp of New York. In 1998, Ryan won election to the United States House of Representatives . . . He is now in his seventh term.

Ryan currently chairs the House Budget Committee, where he has played a prominent public role in drafting and promoting the Republican Party’s long-term budget proposal. He introduced a plan, The Path to Prosperity, in April 2011 as an alternative to the budget proposal of President Barack Obama, which included controversial changes to Medicare. He then helped introduce The Path to Prosperity: A Blueprint for American Renewal in March 2012, in response to Obama’s 2013 budget.

By choosing Ryan more than two weeks before the Republican convention in Tampa, which starts Aug. 27, Romney will have a chance to build a crescendo of excitement leading up to the event.

But he will also have in place at an early point in the campaign a powerful fundraiser who can add even more heft to the formidable Romney money machine.

Ryan has proven prowess at opening up GOP wallets. He has already raised $4.2 million for his own House campaign this election cycle, as well as $4.3 million for his political action committee, Prosperity PAC.

Note: This is a revised version of an earlier article that was written before the choice of Ryan was certain.

32 thoughts on “Romney Chooses Ryan to Run as Vice President”

8:30 am | Participates virtually in the annual East Asia Summit
9:45 am | Receives the President's Daily Brief