The White House incorrectly claimed that a bust of Winston Churchill was not removed from the White House when President Obama moved in, insisting with emphatic certainty that it had simply been moved to the residence but then retracting the assertion.

In a “Fact Check” post added to the White House website Friday, White House Communications Director Dan Pfeiffer scornfully dismissed as “100% false” the “rumor” that Obama had removed the Churchill bust that had presided over the George W. Bush Oval Office and shipped it back to the British.

Turns out Pfeiffer’s was the false statement.

Now, normally we wouldn’t address a rumor that’s so patently false, but just this morning the Washington Post’s Charles Krauthammer repeated this ridiculous claim in his column. He said President Obama “started his Presidency by returning to the British Embassy the bust of Winston Churchill that had graced the Oval Office.”

This is 100% false. The bust still in the White House. In the Residence. Outside the Treaty Room . . .

Last year the AP reported that President Obama “replaced the Oval Office fixture with a bust of one of his American heroes, President Abraham Lincoln, and moved the Churchill bust to the White House residence.”

In case these news reports are not enough for Mr. Krauthammer and others, here’s a picture of the President showing off the Churchill bust to Prime Minister Cameron when he visited the White House residence in 2010. 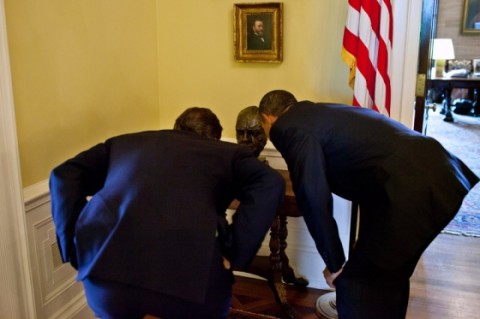 “Hopefully this clears things up a bit and prevents folks from making this ridiculous claim again,” Pfeiffer sneered.

In what he labeled an “Update” but which is actually a “Correction,” Pfeiffer later added that there are in fact two busts, and the one that was in the Oval Office was indeed removed when Obama took office.

At the start of the Bush administration Prime Minister Blair lent President Bush a bust that matched the one in the White House, which was being worked on at the time and was later returned to the residence.  The version lent by Prime Minister Blair was displayed by President Bush until the end of his Presidency.  On January 20, 2009 — Inauguration Day — all of the art lent specifically for President Bush’s Oval Office was removed by the curator’s office, as is common practice at the end of every presidency. The original Churchill bust remained on display in the residence.

The idea put forward by Charles Krauthammer and others that President Obama returned the Churchill bust or refused to display the bust because of antipathy towards the British is completely false and an urban legend that continues to circulate to this day.

Notice what Pfeiffer now says is completely false: “. . . that President Obama returned the Churchill bust or refused to display the bust because of antipathy towards the British.”

Gone is the truculent assertion that the bust that had been in the Oval Office wasn’t removed from the White House. The claim now is merely that Obama doesn’t hate the British.

Missing also is any acknowledgement of what I presume – I know you all will think I’m naïve – was an honest mistake.

As originally stated by those wild rumormongers, the bust is in possession of the British, at their ambassador’s residence in Washington, presumably awaiting return to the Oval Office should Mitt Romney become president.