Many of you may already have read the incredible news, WHICH I AT FIRST THOUGHT MUST BE A PARODY, that the Obama campaign had asked to be placed on people’s registries!

Here’s a screen shot of the request from the Obama 2012 website. 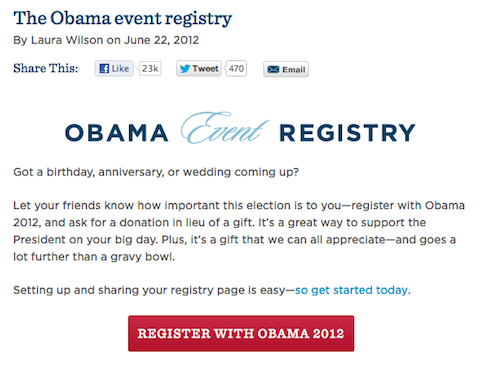 What few people realize is that this was actually the most acceptable of several similar unconventional fundraising tactics the Obama campaign considered deploying.

White House Dossier, through its network of paid sources within the Obama campaign, has unconvered a list of sample messages to donors proposing various other ideas for having them part with their money. We print for you here the  top ten very personal fundraising pleas that were rejected by the Obama campaign.

1. Going to church this Sunday? When they pass the hat, reach in, take the money out, and send it to President Obama.

2. Did your rich uncle recently pass away? Please consider donating a portion of your inheritance in his name to the Obama campaign.

3. Do you yourself have a terminal illness? Make sure your will reflects your commitment to President Obama.

4. Are you one of the few people who shorted Facebook? Don’t forget the Obama campaign. And pick up some Nicorette for him.

5. Planning on robbing a 7-11 this week? Please remember to share a portion of the loot with President Obama.

6. Counting cards in Las Vegas? Don’t forget to share some of the winnings with your president.

7. Running a pyramid scheme for your financial clients? Please send the Obama campaign a portion of the “investments” before the scheme collapses.

8. You know your children don’t keep track of the money in their checking accounts. Remove half of it and send it to President Obama.

9. Planning to kill someone for the insurance money? Assuming you get away with it, please donate a share of the proceeds to Obama 2012.

10. Tired of being criticized for being in the “one percent”? Take a moment to donate enough to the Obama campaign so that you can boast that you are merely a member of the “two percent.”

Have you heard any we might not be aware of?