Obama to Host the Bushes at the White House


George W. Bush and Laura Bush will be at the White House Thursday for the official unveiling of their portraits.

President Obama, as you well know, has blamed Bush for every problem he has encountered, suggested he presided over eight years of waste in which he sought to help out his rich buddies, and that he waged war either unnecessarily or poorly. 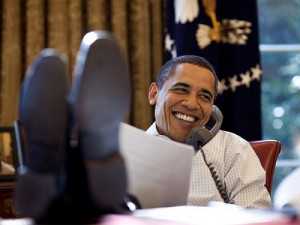 Bush has said nothing in return. Can you imagine what restraint it took Bush not respond to the constant defamation? I think what has allowed him to maintain such grace is his respect for the presidency. He just doesn’t think it should be a pissing match.

I once remarked to a Bush aide that I had read that Ronald Reagan never took his jacket off in the Oval Office. The aide looked at me quizzically and said, “Neither does Bush.”

Bill Clinton, of course, removed more than his jacket. Obama as far as we know has kept his pants on, but has no problem taking his jacket off, dropping by in a polo shirt, and putting his feet up on whatever furniture is handy, historic or not.

I wonder if Obama will say any of the things he says to Bush’s face. I guess not. And Bush will of course pretend it never happened.