I thought it was pretty degrading that President Obama is in the business of auctioning himself off to donors to raise cash. Which makes it only slightly less degrading that his challenger IS DOING EXACTLY THE SAME THING.

The “Grab a Bite with Mitt” contest is the top item on his website and the subject of an email just sent out to supporters.

On the campaign trail, I’m always on the go. So it’s nice when I can sit down and eat a meal — especially with supporters like you.

We’ve done this sort of thing before, and I always look forward to it. It gives me a chance to hear your ideas about turning this country around. And I never turn down a chance to grab a burger or a stack of pancakes — just ask Ann.

Donate $3 today to be automatically entered for a chance to join me and grab a bite to eat on the campaign trail. 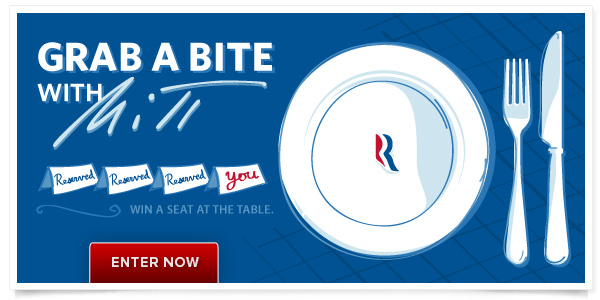 Note the ticket price of $3 is even exactly what obama is asking for.

I’m not sure which is more disconcerting, that Romney thinks it’s Okay to raffle himself off, or that his campaign has to rip off Obama for fundraising ideas.

What’s next, a bake sale? Or five bucks to guess the number of jellybeans in a jar? Hit the target and dump Mitt in a vat of water?

Well, I guess it’s only fair play. Obama copied Mitt on Romneycare, so the president owes his challenger a little intellectual property.

37 Responses to Mitt Submits Himself to a Raffle