It looks like Vice President Biden may be a keeper.

Biden’s name has taken new prominence on the Obama 2012 campaign website, suggesting there’s now little chance that President Obama will dump him in favor of a more appealing running mate, like Hillary Clinton.

The top of the website now gives Biden nearly equal billing with The One, reading “Obama Biden,” with Obama’s personal symbol separating the two names.

And Biden is now on the bumper sticker, which for some reason features the flag of Luxembourg. 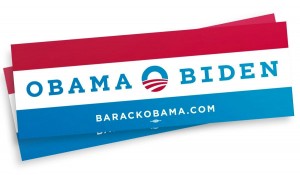 The flag of Luxembourg:

Which begs the question. Is there a large population of Luxembourgian immigrants in Ohio?