At the Obama White House, the Party Never Stops

Tuesday night’s White House celebration of the blues, during which Obama sang and he, his wife and guests boogied to the sound of some of America’s greatest musical legends, is just the latest in a series of command performances and swinging parties the Obamas have thrown over the past year.

Just three months ago, on Nov. 11, the Obamas summoned a group of country music greats into the White House to perform for them. Last May, they sat for a poetry reading – including a recitation by the controversial rap artist Common. And in February 2011, the Obamas were treated to a show by the surviving stars of the Motown era. 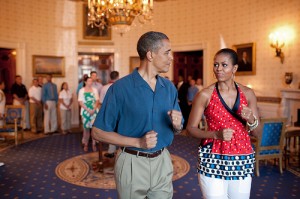 Performances in earlier years staged for the Obamas have included a tribute to Paul McCartney – where the former Mop Top derided George W. Bush as an idiot –  a festival of Latino music, a “salute to Broadway,” a jazz concert, a “music of the civil rights movement” event, a classical music concert, and a “dance tribute” to ballet artist Judith Jamison.

The Obamas have also held a series of bashes this year, starting with a Super Bowl party last February that feature a variety of fattening treats well off the “Let’s Move” diet.

May 5 called for a reception celebrating Cinco de Mayo, where Obama warned, “You do not want to be between Michelle and a tamale.”

A White House Fourth of July barbecue for hundreds of troops and their families was a commendable affair.

But of course it was followed by a lavish display of self indulgence in Chicago the following month, when the president hosted an Aug. 3 birthday bash/fundraiser where attendees paid up to $35,800 and were treated to the sight of stars like Jennifer Hudson and Herbie Hancock serenading Obama. 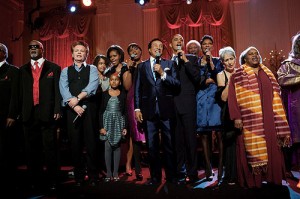 Obama then traveled back to Washington for a private affair on his birthday, Aug. 4, where A-List stars like Charles Barkley, Chris Rock, Jay-Z and Tom Hanks showed up to fete Obama in the Rose Garden.

None of this, of course, includes the multitude of White House holiday parties the Obamas presidents throw – as do all presidents and their wives –  including a series of Christmas soirees and events celebrating Hanukkah and Ramadan.

45 thoughts on “At the Obama White House, the Party Never Stops”