On Monday, the Boston Bruins came to the White House to be feted in the East Room by the president, as many champion and professional and college sports teams do. It’s an unserious business that provides an undeserved treat for a bunch of jocks and a political photo op for the president.

Does the champion college debating team come to the White House to nibble on petit fours and be lauded by the leader of the free world for their accomplishments? Fat chance. How about the U.S. Chess Champion? Forget about it.

The president meets with at least a couple of dozen male and female championship teams over the course of the year. George W. Bush participated in the nonsense too, and if anything increased to number of gatherings. Obama maybe added even more events in the name of getting more women’s teams and players from lesser known sports into the room. Add it all up and probably a day or two of the president’s time is spent over the year congratulating people who can throw a ball better than other Americans.

On Monday, a serious man decided to dispense with the inanity of politicians and the little thrill of an invitation to the White House. The great Boston Goalie Tim Thomas, who was the most valuable player of the Stanley Cup Playoffs, boycotted the event. Here, in his words, is why.

I believe the Federal government has grown out of control, threatening the Rights, Liberties, and Property of the People.

This is being done at the Executive, Legislative, and Judicial level. This is in direct opposition to the Constitution and the Founding Fathers vision for the Federal government.

Because I believe this, today I exercised my right as a Free Citizen, and did not visit the White House. This was not about politics or party, as in my opinion both parties are responsible for the situation we are in as a country. This was about a choice I had to make as an INDIVIDUAL.

Now, let’s be clear, this isn’t “not about politics.” Liberals don’t hold the views expressed by Thomas in this message. He’s clearly a conservative, and undoubtably doesn’t like Obama. But he believes strongly enough that there are real problems besetting the country, and that he could help by making a stand. Or at least satisfy his own conscience. Even if he didn’t get to meet the president at the White House.

What a contrast to Washington, where getting a photo with the right person and achieving proximity to the powerful is more coveted than money. Well, almost.

The Obamas don’t invite me anymore to the annual White House Christmas party for journalists. If you read the blog, you can imagine why. It’s a little petty, but I understand. 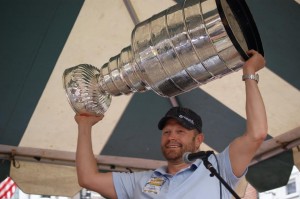 And I admit it, I like to go, meet the president of the United States, get my photo and my 20 seconds chatting with him, and wander through the historic rooms of the great house.

And I love the lamb chops. Really, you haven’t tasted lamb chops until you’ve had the ones they serve at the White House.

Though my colleagues meant well, you should have heard the level of sympathy some of then expressed when they found out. It was like I had been denied the chance to sunbathe in the Garden of Eden.

I don’t really care. Mainly because I’ve been to enough of these things. But Tim Thomas, at 37, probably had his last chance to meet a president and visit the areas of the White House that don’t get opened to the public.

Thomas knows that the president, while an honored person, is just a person. And the White House, while a special place, is just a collection of dead trees and mortar.

But he believes that liberty, on the other hand, is sacred.