About seven or eight years ago, I had a really bad case of sciatica. It had lasted months, and the pain down my leg could be excruciating. I visited an orthopedist who, because society was in an uproar about their use, was unwilling to give me prescription-strength pills to alleviate my suffering.

He was unwilling to prescribe me painkillers. But he was willing to do surgery.

I was reminded of this today while I read a piece in the Washington Post describing President Obama’s expanding program of killing bad guys with drones. Obama, you may remember, was the moral crusader against the evils of the Guantanamo Bay prison and perils of rendition, demanding that our enemies be sent to the United States for civilian trials at which every legal courtesy would be theirs – as well as a platform for them to fulminate against our country. 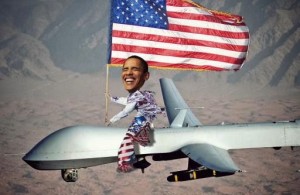 Obama ended the CIA’s detention program and barred the entrance of new prisoners to Gitmo – he didn’t quite close it. Meanwhile, he is dispatching model airplanes around the globe to assassinate suspected terrorists instead, denying us the chance to place them in cockroach-infested cellars and find out what they know.

Obama is unwilling to put suspects in detention. But he is willing to kill them.

Don’t get me wrong, the drone program is generally a good thing, though it’s probably overused. I’m sure if we still had good resources for hanging onto these people, we’d take some of them instead of kill them, and possibly prevent future attacks and develop leads to take out more of their colleagues.

But what hypocrisy. Instead of bringing them to Cuba, where some have eventually been found to be innocent and released, Obama kills them. The highly secretive drone program keeps the president’s hands nice and clean – none of the unpleasantness and bad publicity of having to pry information out of people or decide what to do with them.

It’s how Obama – the man who just abandoned Iraq while staging an ongoing planned retreat from Afganistan – likes it. A nice, antiseptic war that requires minimum U.S. commitment.

I know the headlines say al Qaeda is on its last legs. I wonder, how do we know? Our best intelligence used to come from the prisoners we no longer obtain.

Meanwhile, the man who campaigned as the protector of American values now shoots first and asks questions later.