Obama to Iran: We are Weak, Do What You Will

One of the things this White House is really bad at is understanding that the small things we do and say are intensely perused for deeper meaning by our enemies, as well as our friends. Even things we do innocently are perceived as having wider meaning by other cultures that may rely more on their poetry and literature than we do or might merely be stuck deeper in a mindset of suspicion.

Someone once told me a story of how Jim Henson appeared in Russia with his Muppets. After the show, someone asked him a question:

“What do these Muppets signify?”

“Surely they must mean something. What do they stand for?”

Obama, oblivious to the meaning attached to his actions by others, is conducting a Muppet-based foreign policy. Perhaps this is because the president is a naïf and the secretary of state is just now getting some experience in foreign affairs.

Obama began his presidency with offers to chat with the Iranian leadership as reasonable fellows who all want the best for our children. When he realized this was only giving the Mullahs a good chuckle, he supposedly toughened up. But his actions say otherwise, and Iran is surely taking note. 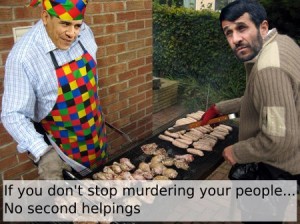 The critical signal to the Iranians that we won’t oppose their designs on the region and their quest for nuclear weapons is our total withdrawal from Iraq. You really don’t need to be Talleyrand, Mrs. Clinton, to understand that this tells Iran that we want out of the region, and we will not back up our empty words.

The Iranians have for a decade been doing all they could to kill U.S. soldiers in Iraq and grab political power within the country. They are our strategic enemy, and it was imperative to keep a decent-sized force in Iraq to counter the threat. We did the very same thing in Germany after World War II to put the Soviets on notice, and it worked out quite well.

In the last couple of days, Obama has sent two additional messages of pusillanimity to our enemies in Tehran. As if more were needed.

According to the Jerusalem Post, Obama, who vowed to exact the most draconian sanctions known to man against Iran after they plotted to perform assassinations on our soil, is actually pressing Congress to weaken proposed new measures because they might upset people.

Kirk, a Republican, is the co-author along with Democratic Senator Robert Menendez of a proposal to penalize foreign financial institutions that do business with Iran’s central bank, the main conduit for its oil revenues.

The Senate approved the proposal last week 100-0 despite lobbying against it by Obama administration officials, who argued that threatening US allies might not be the best way to get cooperation in action against Iran.

An opinion piece in the Wall Street Journal today describes how Obama is preparing to allow Iraq to take possession of one Ali Musa Daqduq, a Hezbollah terrorist responsible for the torture and death of five U.S. soldiers. Once he is given to Iraq, he will be on his way to Iran and a ticker tape parade through the streets of Tehran.

There is an obvious solution: Transfer Daqduq from Iraq to Guantanamo Bay to be tried by a military commission there. But this is where the Obama administration’s rigid ideology comes into play—beginning with flawed, self-defeating legalistic arguments . . .

The administration believes that bringing anyone new, even high-value detainees, to Guantanamo is inconsistent with the goal of eventually closing the facility. This proposition is absurd, and not only because that facility remains vital and relevant to this day. It raises the question of whether administration’s detention policy is actually shaped by a crass political calculus of not antagonizing its liberal base in advance of what promises to be a difficult 2012 election.

Mrs. Obama makes much of her campaign to help veterans’ families. It’s a nice idea, and certainly goof for her husband politically. But bringing their murderers here for trial is too inconvenient.

And it’s just the latest signal Iran needs to go fast forward with its nuclear program and its quest for regional supremacy. A policy of weakness ensures that down the road, even more veterans’ families will need comforting.

56 thoughts on “Obama to Iran: We are Weak, Do What You Will”