Can it be? After golfing 13 weekends in a row, it seems President Obama is now forsaking his favorite pastime on a regular basis.

Did Michelle tell him to stop it? Did David Plouffe tell him the Man of Hope and Change might need to cut back on the The Sport of Those Who Don’t Need Either Hope or Change? At least while the country is careening toward financial default.

The lack of a soothing game of golf may be having an effect. Obama walked out of a meeting on the debt ceiling last week in a purple rage. And White House Press Secretary Jay Carney excluded reporters from a photo op, citing their annoying questions the day before – a clear sign Obama blew his top after the questioning got to him.

Anyway, he had nice, healthy day Sunday with His Maker and his family.

And here they are watching the women’s soccer World Cup final. 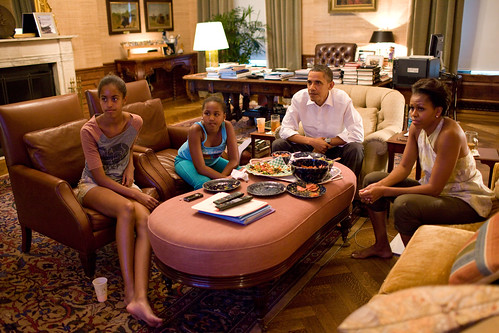 27 Responses to Obama: Three Weekends in a Row With No Golf