It’s becoming increasingly obvious that President Obama will have Osama Bin Laden on the campaign trail with him as he seeks to buff up his weak credentials as a foreign policy tough guy.

The president, whose original strategy of coddling dictators has failed to gain results and who was seen early in his presidency bowing to every satrap in sight, will brandish his killing of Bin Laden as proof that he is strong on national security and foreign policy. 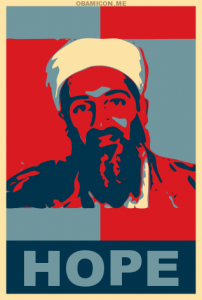 As if this single act could erase the rest of it. It’s like complimenting someone on their sweater before you punch them in the face.

He’s cutting the defense budget during time of war, has been inconsistent and indecisive on the Arab uprisings, can’t defeat Qaddafi and his band of camels and Amazon warriors, is undermining Israel – our key military ally in the region, has signalled to the Taliban that we’re desperate to get out of Afghanistan, and is trying to hand of U.S. world leadership to Europe, which effectively disarmed itself years ago.

But he killed Bin Laden.

Obama took a long victory lap in the aftermath of the Bin Laden killing to tout his role in it, claiming dubiously that his call for the CIA to focus more on attacking al Qaeda resulted in the Bin Laden hit, which was the result of intel developed over many years.

Then the talking points were sent to every administration official: The decision to go ahead with the raid was a “gutsy call.”

The best evidence of the importance the Obama camp places on the Bin Laden killing comes from comments this week by Vice President Biden at a Democratic fundraiser in New Hampshire. From a report in the Los Angeles Times.

Biden laid out three reasons why he was optimistic about the 2012 campaign: the flawed Republican vision, the return of 2008 “surge” voters who stayed home in the 2010 midterm election, and the growing confidence he said Americans feel in President Obama’s leadership.

On the latter point, the vice president said the decision to order the raid that killed Bin Laden was a major turning point, calling it “the boldest undertaking any president has undertaken on a single event in modern history.”

“The American people no longer confuse being contemplative with having courage,” he said. “The American people watched him execute the decision — not only putting the lives of those special operators on the line, but his entire future on the line as president of the United States of America. And he didn’t hesitate.”

It was that decision, Biden said, which pre-empted the emerging campaign from Republicans to portray Obama as weak and indecisive. And it has led Americans to change how they’ve viewed other decisions he’s made, like the auto industry bailout and stimulus program.

“The American people now … have a crystal clear picture of how strong and decisive this president is. And that’s the last piece of the puzzle that had to be put in place for this great man,” Biden said.

Last week at a fundraising rally in Boston, Obama took credit for the operation while pretending he was only commending the troops.

We’re taking the fight directly to al Qaeda. And because of the bravery of our men and women in uniform, Osama bin Laden will never again threaten the United States of America.

If you mention this at a POLITICAL  rally, then you are POLITICIZING it. Please don’t hide your politicking behind the Navy Seal Team 6, Mr. President.

And all this after White House Press Secretary Jay Carney, two days after the operation, said it had nothing to do with politics.

I think that what happened on Sunday — and this is very important because it would be a shame if this became a piece in a partisan narrative, because what I think the President feels very strongly about is that the accomplishment on Sunday was an American accomplishment, and it was not a Republican or a Democratic accomplishment, but the result of incredibly hard work, especially by a lot of unseen and unknown individuals in the military and in the intelligence community.  And it was the product of a focus that was brought to bear on bin Laden, on al Qaeda central, and that was — and then the product of a very risky operation.

We should have known. Even as Carney was saying no one deserved credit, he couldn’t help but assert this was “the product of a focus that was brought to bear on bin Laden.”

Well, we did know. What were the chances really Obama was going to be a statesman about this?