EXCLUSIVE!!!! White House Dossier has obtained the cover jacket of a new book by President Obama. We give you below a photo of the front cover and a reprint of the blurb by Obama found on the side panel. Take a look! 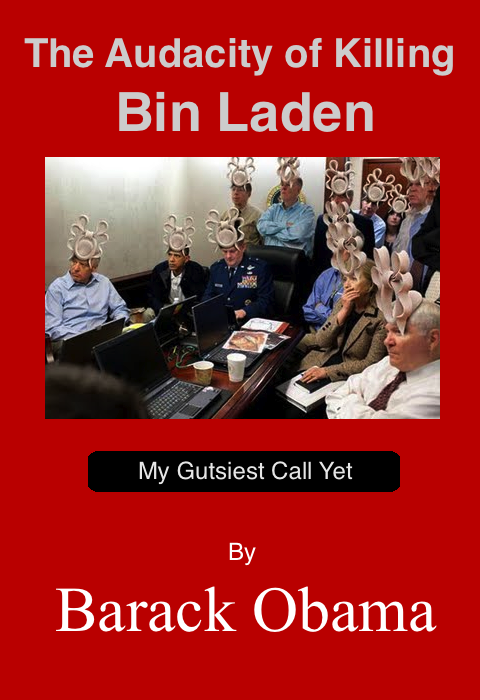 “I highly recommend this book to anyone who thinks I’m not a true badass. Just because I tried to make friends with Ahmadinejad and am afraid of Nancy Pelosi doesn’t mean I can’t take care of business.

Earlier this year, while trying to figure out whose ass to kick, the CIA brought me some startling information: I could kick Osama Bin Laden’s ass, the biggest ass of all.

This was not surprising to me, because it was the result of my policies, and not of those of George W. Bush, who was not a good president and couldn’t find Bin Laden.

Early in my term, I went to the CIA and told them: “Take out Bin Laden.”

And they said, “What do mean, like take him out for sushi?”

And they said, “We’re already trying to kill Bin Laden.”

And they said, “We already have all the available assets working to kill him. Bush was trying to get this guy for years. It’s the highest national security priority.”

And I said, “Make it an even higher national security priority than Bush made it.”

And they said, “Well, I guess we could hire another receptionist.”

In this book, I talk about it all: The agonizing Oval Office decisions, the sleepless nights wondering if I wore the right pajamas, the cool gadgets in the Situation Room, the terrible decision to tear myself away from golf and watch the Osama Bin Laden raid on closed circuit TV.

You’ll be there with me for it all, as if you were in the room – but off in the corner, not in the middle where I sit.

I promise, that after you read this book, you’ll never want to read another book again.

22 thoughts on “Mr. President, Was This Book Really Necessary?”