The Obama campaign is using the birther issue and the book out this week by Jerome Corsi, “Where’s the Birth Certificate?” to raise money.

Corsi’s book was apparently already at the printers when Obama released his birth certificate.

For a $15 donation, you can get this coffee mug: 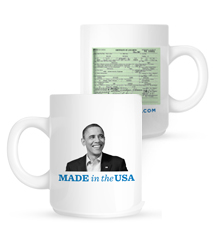 OK, just joking on the last one.

Below is the fundraising email describing the offer. It was sent today to the Obama campaign email list by Deputy Campaign Manager Julianna Smoot.

Let me introduce you to Jerome Corsi.

This week he released a new book that the publisher says will be a bestseller “of historic proportions.”

The title is “Where’s the Birth Certificate?” — yes, really.

Corsi’s work is a greatest-hits reel of delusions, ranging from 9/11 conspiracies to claiming that there is an infinite supply of oil in the Earth’s core. In 2008, he published a book about Barack Obama claiming, among other things, that he (a) is a secret Muslim; (b) is secretly anti-military; (c) secretly dealt drugs; and (d) secretly supported terrorist actions when he was eight years old. So many secrets!

There’s really no way to make this stuff completely go away. The only thing we can do is laugh at it — and make sure as many other people as possible are in on the joke.

So let’s just do this — get your Obama birth certificate mug here:

Last year, the President said, “I can’t spend all of my time with my birth certificate plastered on my forehead.”

This is about as close as we can get.

If the facts can’t make these ridiculous smears go away, we can at least have a little fun with it.

And then we’ll get back to the important work of supporting the President as he tackles real problems like high gas prices, the deficit, and unemployment.