The White House today released a Hawaii birth certificate saying President Obama was born in Hawaii. You can view a large image of it here.

The certificate says he was born at Kapiolani Maternity & Gynecological Hospital in Honolulu at 7:24 pm on August 4, 1961. There does not appear to be any information on the certificate that could be damaging to the president in any way. 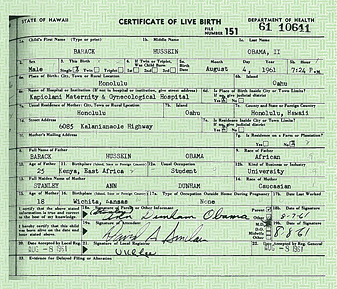 The certificate lists Obama’s father as African and his mother and caucasian. It does not include a race for the child.

Obama initiated the request for his birth certificate on April 22, according to the correspondence released by the White House. The release required a waiver of Hawaii’s policy of providing only the short form certificate.

Obama appeared in the White House Briefing Room today to say that he had released the certificate because it was distracting from serious debate about other issues.

“Normally, I would not comment on something like this – I’ve got other things to do,” he said.

“We’ve got some enormous challenges ou there” which the country can’t meet . . . if we we are distracted or if we spend time vilifying each other – if we just make stuff up and pretend that it’s fact.”

Obama spoke derisively of those promoting the issue. “We do not have time for this kind of silliness,” he said. “We’re not gonna be able to solve our problems if we get distracted by sideshows and carnival barkers.

Obama said the issue was brought home to him two weeks ago when throughout the budget debate, the top item on the news was his birth certificate, a clear reference to Donald Trump’s use of the issue.

Obama took no questions and did not explain why he had not released the document earlier.

Obama said he had been bewildered by the debate over his birth. “I have to say that over the last two and half years I have watched with bemusement, I’ve been puzzled by the degree to which this thing just kept on going,” he said.

He acknowledged that the issue would probably continue to fester, despite today’s action.

“I know that there’ going to be  a segment of people who, no matter what we put out, this issue will not be put to rest,” he said.