There are various ways to conduct a war, but SILLY isn’t an advisable option.

President Obama today announced that, you know, some things in Afghanistan are getting a better, though “this continues to be a very difficult endeavor.” Anyway, we’re starting to leave in July 2011. And we’re still on track to get more or less completely the Hell out by 2014.

It’s pretty clear to any rational observer that we were going to start leaving next summer no matter what. The troops are only just getting in place, and we’ve only had a few months to assess their success.

What’s silly about this policy is not just that we’ve signaled the Taliban to wait us out, but that our retreat – I’m sorry, our handover to the Afghanis – seems to have its own logic and timetable separate from whats happening with the war.

The other silly part is this “Well, I didn’t say HOW MANY troops we’re taking out” line the White House puts forward.

I guess we could send four people home next July and this would fulfill the policy.

But because we have to take some out, and because Obama probably doesn’t want to provoke hilarious laughter at his own expense, I assume we will remove at least several thousand troops to show we’re serious about retreating. Handing over power.

And to do less would be for Obama to admit he made a mistake in setting the date, right as the GOP primaries are heating up, which is not the time he’s going to be admitting any mistakes.

This withdrawal will interfere with the military effort just as it is starting to achieve results.

Obama today claimed success for the rationale of his retreat-date-setting, saying it had prodded the Afghans to get off their asses and fight their own war.

I would add that much of this progress – the speed with which our troops deployed this year, the increase in recruits – in recruiting and training of Afghan forces and the additional troops and trainers from other nations – much of this is the result of us having sent a clear signal that we will begin the transition of responsibility to Afghans and start reducing American forces next July.

How does he know? It’s like the “jobs saved or created” argument for the stimulus. How do you prove a negative? How do you show that something wouldn’t have happened if you had not taken certain steps.

Really? These new Afghan recruits heard Obama say the United States would begin to withdraw by July and said, “Wow, I better join up now! What was I waiting for?”

Obama then added another claim for the policy, this one an amusing absurdity.

This sense of urgency also helped galvanize the coalition around the goals that we agreed to at the recent NATO summit in Lisbon: that we are moving toward a new phase in Afghanistan, a transition to full Afghan lead for security that will begin early next year and will conclude in 2014, even as NATO maintains a long-term commitment to training and advising Afghan forces.

He’s saying that announcing the policy helped caused NATO to embrace the policy. It’s like saying my policy of mowing the lawn has resulted in shorter grass. Well, yes, NATO would never have gotten behind the policy if it hadn’t been announced. 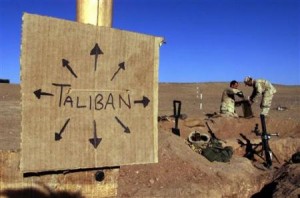 I’m a little old fashioned in that I think, all things being equal, YOU NEED TROOPS TO WIN WARS. All things are not equal, of course. There are many other elements to fighting. But YOU AT LEAST NEED THE TROOPS.

The eternal logic of this is clear from this New York Times piece today which describes the rather sudden change of fortune in the southern area of Afghanistan, where Obama’s new brigades are flowing in.

The stepped-up operations in Kandahar Province have left many in the Taliban demoralized, reluctant to fight and struggling to recruit, a Taliban commander said in an interview this week. Afghans with contacts in the Taliban confirmed his description. They pointed out that this was the first time in four years that the Taliban had given up their hold of all the districts around the city of Kandahar, an important staging ground for the insurgency and the focus of the 30,000 American troops whom President Obama ordered to be sent to Afghanistan last December.

“To tell you the truth, the government has the upper hand now” in and around Kandahar, the Taliban member said.

Would that we had enough people in the country to do this everywhere and finish the job.

During World War II, we had 16 million men and women under arms from a country with half the population of the one we have today. In Afghanistan, we have 98,000 troops. Do we fight some wars to win, and some with our fingers crossed?