There are, in Washington, THE THINGS EVERYBODY KNOWS.

EVERYBODY KNOWS,  for example, that the Tea Partiers are a bunch of right wing boobs. You cannot, in polite conversation in the nation’s capital, say something like, “Wow, that was a really good idea those Tea Party people had.”

You will be laughed right out of the room. Washingtonians did not have their parents pay for elite East Coast university educations only to have to listen to nonsense from the common-sense crowd in the hinterland.

EVERYBODY ALSO KNOWS that Sarah Palin was just being her usual idiot self when she talked about Obamacare leading to Death Panels. Her assertion is dismissed out of hand in mainstream – supposedly neutral – news reporting as wrongheaded hyperbole.

I have never understood why this occurs, other than that the statement is coming from Sarah Palin and that it makes Obamacare sound like it might be a little scary. 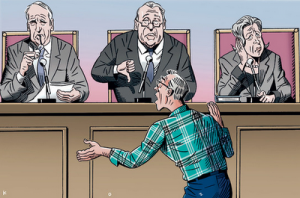 But the logic is very simple. Under the health reform law, the government will have extraordinary new control over health insurers. The companies will be heavily regulated and restricted in their ability to raise rates, even as they are forced to cover everyone and drop no one and provide a variety of mandatory benefits.

To stay in business, they will have to cut costs.  And where is the best place to cut costs? END OF LIFE CARE. And who will decide what is appropriate end of life care? DEATH PANELS.

So I hope you are not shocked to read in the Washington Post that Donald Berwick, the new Medicare chief, is considering withholding payment for Provenge, an expensive new prostate cancer vaccine that would extend life for terminal patients by a median of four months.

In the world of terminal cancer treatment, taking exceptional steps to extend life for a median of four months is a quite unexceptional thing to do. It’s considered successful treatment. It also means that some patients will live quite a bit longer.

It is not customary for Medicare to include cost considerations in making such a ruling, according to the Post. Berwick’s decision the consider cost is groundbreaking and has consequences for all of the health care market, beyond Medicare. Insurers take their cue from Medicare. If the feds ain’t paying, Aetna ain’t paying.

But Donald Berwick, you will remember, is not your ordinary Center for Medicare and Medicaid Services Chief.

Before Donald Berwick goes to sleep every night, he says a prayer thanking The Lord for the British health care system.

Obama and Berwick decided in July that it was so important for him to get right to work that he couldn’t possibly be subject to annoying questions about his views from the Senate. So Obama installed him by recess appointment.

Among the uncomfortable quotes senators might have wanted to have discussed with Berwick:

Any health care funding plan that is just, equitable, civilized and humane must, must redistribute wealth from the richer among us to the poorer and the less fortunate. Excellent health care is by definition redistributional.

Berwick, in keeping with his preference for avoiding scrutiny while doing what HE KNOWS  is best, declined to comment to the Post.