This is how Obama has been supporting Democrats, basically: By soaking up funds from fat cats.

From the pool report out of Providence, R.I.

For tonight’s fundraisers, DCCC Ryan Rudominer informs us that the two fundraisers together are expected to bring in $500,000, which will be divided between the DCCC and the Rhode Island Victory Fund for Democratic congressional candidate David Cicilline. First event, the reception, has about 424 people in attendance at a cost of $500 a person. The dinner, where 40 people are expected, costs ranged from $15,000 a couple to $7,500 a person.

He travels from dinner to dinner in the various ritzy suburbs of the nation, leaving them just a little less rich – which by the way is also what his tax policy will do. His political arm, “Organizing for America,” is asking for $3 from each of its millions of members in an effort to preserve the grassroots spirit of 2008. But dinner in Beverly Hills is where the real action is. 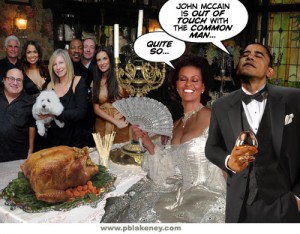 Unpopular in so many places, Obama has avoided areas where he might not receive a pleasant response. According to ABC’s Jake Tapper, Obama’s visit to Providence is his 23rd trip in a row to a blue county he won easily in 2008. Most candidates seem to be avoiding him. While he has appeared with and raised money for a few Democrats waging tight races, he generally cloaks his support for them by sticking to general fundraising for broad outfits like the DNC or the congressional campaign committees.

The president has made so many disparaging comments by day about the wealthy and the various industries that make our corporate citizens rich, it’s a pleasure to watch him panhandle them by night. Does he not think the people sipping cocktails at his fancy “receptions” – the White House code word for a fundraiser – stepped on the corpses of various vanquished competitors to get to the point where they could contribute $30K a couple?

I assume as long as they’re not executives with Citigroup or Aetna they are welcome to attend, no matter that they perhaps polluted the culture with violent films or convinced a jury to ruin some doctor by playing up a compellingly bad health care outcome.

I hope none of these people belong to their local Chamber of Commerce or any other group with a no-name corporate political slush fund. Or that their income doesn’t come from scary “foreign” sources. Because it might be kind of hypocritical to be hitting them up, you know?