President Obama has stopped suggesting that the Chamber of Commerce may be illegally using foreign money to fund political advertising, dropping references to the nation’s largest business group from his political speeches.

Obama earlier this month began noting that “one of the largest groups” funding ads against Democrats takes money from foreign sources. The White House did not deny that the president was referring to the Chamber, and White House aides supplemented the president’s attack by calling on the Chamber to “open its books” to show it was doing nothing wrong. 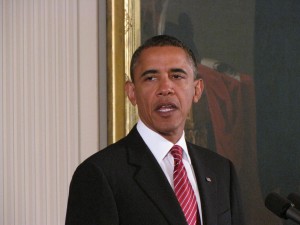 The attack on the Chamber drew questions about the propriety of the president suggesting criminal activity without evidence – like this piece I wrote for POLITICO – and concerns even among Democrats about the wisdom of assailing an organization representing thousands of small businesses and perceived by many Americans as somewhat analagous to apple pie.

The White House appears to have calculated that the Chamber is not the most productive target of its attacks afterall.

The last time Obama himself alluded to the Chamber was an Oct. 7 fundraiser for Illinois Senate candidate Alexi Giannoulias (D), when Obama noted that  “one of the largest groups paying for these ads regularly takes in money from foreign sources.” 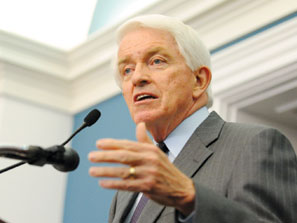 Obama’s White House political team has also toned down its attacks on the Chamber. Asked last Sunday on CNN’s “State of the Union” whether the White House would continue to push this idea that the Chamber is doing something illegal, White House chief political guru David Axelrod quickly sought to steer the conversation away from the business group.

“I think that is not the main question,” he protested, before switching the attacks to groups backed by former Bush adviser Karl Rove, a much more palatable target.

Appearing the same day on NBC’s “Meet the Press,” White House Press Secretary Robert Gibbs did demand, as he had in the past, for the organization to “simply open up the books.”

But Gibbs’ statement was in response to a question, and he has been silent on the Chamber since.

To be sure, Obama continues to criticize Republican political outfits that legally amass funds from donors whom they do not disclose, calling them “a threat to democracy.” Here’s what the president said last night at a rally in Portland, Ore.

These folks, they don’t disclose who the donors are.  They’ve got these innocent-sounding names — Americans for Prosperity, or Moms for Motherhood.  I made that last one up.  But you don’t know where this money is coming from.  It could be insurance companies, Wall Street banks.  It could be foreign-controlled corporations.  We don’t know. This is not just a threat to Democrats; this is a threat to democracy.

But on the Chamber, Obama seems content with having seeded doubts about the group in the minds of the public and then  moving on.

6 thoughts on “Obama Stops Bashing the Chamber of Commerce”