This seems pretty contrived. I mean, is pillow talk really so meaningful? I’m sure Obama listens to Michelle, but he seems like the type that comes to his own, cerebral conclusions. I haven’t seen her fingerprints in many places, certainly not with respect to policy or political strategy.

She has made the office of First Lady her own. A forceful advocate of school nutrition standards and military families’ affairs, she’s more involved in policy than Laura Bush was. But unlike Hillary Clinton, who championed a secretive (and ultimately unsuccessful) health care reform, Obama has stayed away from hard policy. A fashion icon and an athletic mother of two, she’s Jackie Kennedy with a law degree from Harvard and street sense from Chicago’s South Side. She’s also effective: In response to her Let’s Move! campaign against childhood obesity, companies like Coca-Cola, Kellogg and General Mills have pledged to reduce the calorie content of their foods by 2012. The first lady remains popular: 54% of Americans view her favorably.

Sorry, less calories in Cap’n Crunch don’t make you the most powerful woman in the world. I admire her efforts, but I’m willing to bet there are even more fat kids around in 2012.

Athletic mother of two? What does she do that’s athletic?

Jackie Kennedy with a law degree? Did Mrs. Obama’s communications director write this?

Did Mrs. Obama write this?

Perhaps not. I gather putting Angela Merkel on the cover wouldn’t sell too many magazines this side of the Rhine. 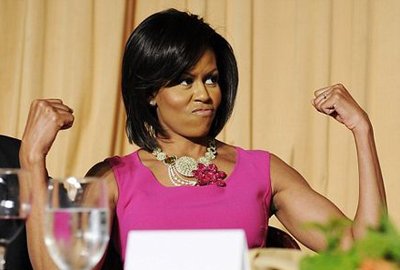