3. “A good plan violently executed now is better than a perfect plan executed next week.”

Now I ask you, which of these statements was made by the current commander in chief of our armed forces, the sublime military strategist and rousing martial leader, President Barack Obama?

You guessed it. And that, by the way, is OUR STATED GOAL in Afghanistan. Not to win, but to break the Taliban’s momentum. It is the U.S. war strategy.

Quote #1 is by Patrick Henry, #2 by John Paul Jones, and #3 by George S. Patton, by the way. Would that they were around today. 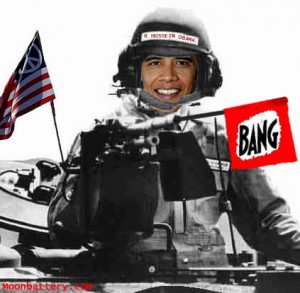 The evidence is now coming in that Obama has made a gruesome, even fatal mistake in his handling of the war in Afghanistan. Obama’s simultaneous announcement ten months ago that he was adding 30,000 troops to Afghanistan and that the United States would begin to leave the country in July 2011 has created the expectation among Afghanis that the United States is – well, doing what it said it will be doing, LEAVING – and that the Taliban will return.

And the Taliban, for that matter, are confidently hunkering down while trying to inflict as much pain as possible until we are gone.

Nobody in Afghanistan, it seems, was fooled by White House assertions that the departure could start as just a trickle, or that Obama was merely trying to put pressure on Karzai to get his act together. The message was clear that Obama wanted no part of this, doesn’t have the stomach for it.

If you have any doubt, just ask the Marines who have to do the fighting.

In terms of the July ‘11 issue, you know, I think if you follow it closely, and of course we all do, we know the president was talking to several audiences at the same time when he made his comments on July 2011.

In some ways, we think right now it’s probably giving our enemy sustenance.  We think that he may be saying to himself — in fact, we’ve intercepted communications that say, hey, you know, we only have to hold out for so long.

– Commandant of the Marine Corps Gen. James Conway at a Department of Defense briefing, August 24, 2010

The Washington Post, not normally known as a saber rattling bastion of warmongering, itself quoted Afghan political analyst Jelani Zwak, who has picked up on the growing perception in Afghanistan that the United States is in full cut and run mode.

Zwak . . . said he has been struck by a change in the “psychology of Afghan people” as he traveled around the country in recent months.

“People in provinces and tribal areas mostly accept this narrative, that [the Americans] are leaving Afghanistan and the Taliban is coming back,” he said.

If there was any doubt about Obama’s pusillanimous posture, it was erased by the Bob Woodward book “Obama’s Wars,” WHICH THE WHITE HOUSE HELPED HIM WRITE. It detailed for all to see Obama’s misgivings about fighting what he had previously described as the “right war,” compared to Iraq (which by the way he also would have lost by opposing Bush’s surge).

Obama is a child, plaintively and deafeningly wailing because he has to clean up his room and can’t play with his toys. For the president, Afghanistan is an unwelcome distraction from the business of remaking American society.

The lesson of Vietnam, still unlearned at this White House, is if you get in a war, you use overwhelming force until you win it. You don’t make a time-limited commitment to stop someone’s momentum.

Bush won in Iraq because he made it clear the United States was increasing it’s footprint and was there to stay. Obama will lose in Afghanistan. And then, what will he do? HE WILL SOMEHOW TRY TO BLAME BUSH, of course.