Today’s Rahm Farewell in the East Room contained surprising moments of poignancy, with the hard driving, bullying chief of staff nearly descending into weepiness when mentioning his dad and then his family.

Obama himself appeared to be holding tenuously onto his cool demeanor as Rahm gave him the ultimate Rahm praise, calling him a tough guy who faced down an economic depression and manhandled other challenges.

Obama gave back, saying it would all not have been possible without Rahm and that Rahm was the greatest thing since sliced bread and possibly even disposable diapers.

Rahm was not above launching his mayoral campaign in the East Room, mentioning that Chicago was the greatest city in the greatest country in the world, and exclaiming his excitement at the Chicago Bears’ 3-0 record.

Practically every senior member of the administration and the White House staff showed up for the event. Journalists speculated on how many of them Rahm has made cry.

Here are some pictures I took for you. 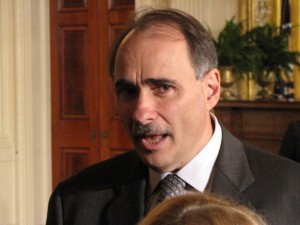 Axelrod shows up for the event and reveals to reporters that he has lost 25 pounds. 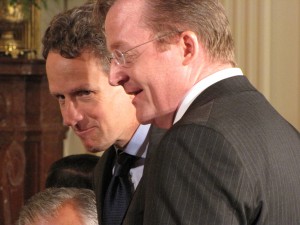 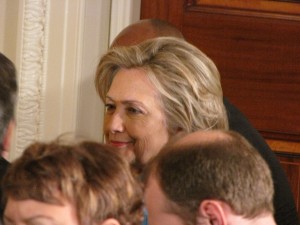 Secretary of State Hillary Clinton listens to Homeland Security Secretary Janet Napolitano, who is just barely seen at the left. 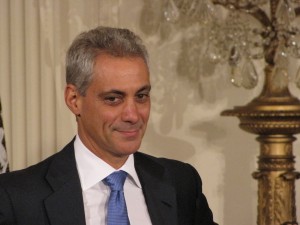 Now we’re underway. Rahm waits his turn as the president lauds his accomplishments. 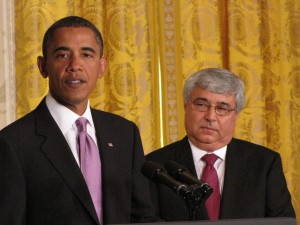 Obama speaks as incoming interim Chief of Staff Pete Rouse looks on. Rouse, true to his taciturn form, said nothing at the event. 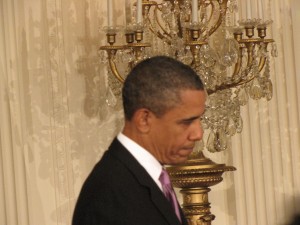 Obama seems to be suppressing emotion – don’t worry, he’s good at it – as Rahm hails his chief. 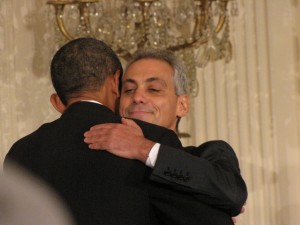 Today is Rahm’s last day at work. He loses his security clearance at close of business. Don’t expect a decision on a permanent chief of staff for several months, said White House Press Secretary Robert Gibbs.

← What Rahm Hath Wrought
The Rahm Wrap Up →