I think all of us remember the uproar when President George W. Bush said this.

I think my public service is part of that effort to express my Christian faith.

I mean, it caused quite a firestorm, ignited a whole debate about separation of church and state and provoked questions about whether Bush was on some sort of Christian jihad to remake the country. 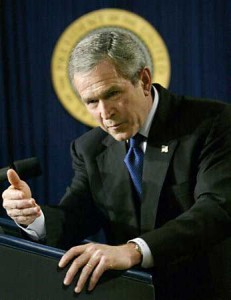 Of course, there will be no outcry, because the intelligentsia that reports on the White House and the poobahs who opine on it are comfortable with Obama as a fellow East Coast university reasonable type who wouldn’t really let all this silly religious stuff get out of hand.

Bush, on the other hand, was seen as simpleton who might just get the idea in his head he was taking orders from God and do something koo koo. Bush seemed just too much like the rest of America for people around Washington to be comfortable with his expression of his Christianity.

Obama today was asked “Why are you a Christian?” at one of these invasions of people’s backyards that the White House is staging. It was a damn good question he would never have got in Washington because most reporters don’t think it’s relevant.

It’s also the danger of this type of event, that Obama won’t be asked “normal” questions. Mostly he was lobbed softballs. One person said he had “three questions” and then thanked Obama for three different things.

Queried on his Christianity, Obama spoke compellingly about his faith.

You know, I’m a Christian by choice.  My family didn’t — frankly, they weren’t folks who went to church every week.  And my mother was one of the most spiritual people I knew, but she didn’t raise me in the church.

So I came to my Christian faith later in life and it was because the precepts of Jesus Christ spoke to me in terms of the kind of life that I would want to lead — being my brothers’ and sisters’ keeper, treating others as they would treat me.

And I think also understanding that Jesus Christ dying for my sins spoke to the humility we all have to have as human beings, that we’re sinful and we’re flawed and we make mistakes, and that we achieve salvation through the grace of God.  But what we can do, as flawed as we are, is still see God in other people and do our best to help them find their own grace.

The same person who asked this also wanted to know his views on partial birth abortion. Here’s the question.

There’s really no laws about the abortion law and when a woman can and can’t have an abortion, whether it’s two months or eight months, and what is your view on that?

That one dodged by the president just as fast as you can say NARAL.

6 Responses to Obama Gets a Christian Question