Appearing on the nation’s top business network, CNBC, Obama sought mightily to portray himself as not being anti-business. But sometimes, the small things we say reveal us, even if we are the president.  Look at what he said here.

I do believe that we’ve got to make sure that basic rules of the road are in place and that consumers, workers, ordinary folks out there aren’t taken advantage of by sharp business practices.

And I don’t think that there’s anything about that that’s inherently anti-business. Some of the business owners that we heard today, you know, they are making a profit by offering a good service at a good price. And that’s who we want to see rewarded.

Look particularly at the last line. It shows, ironically, what Obama is seeking to deny. I might be stretching it, but I don’t think so.

Here’s what I’m talking about.

Anyone who understands capitalism or business, and particularly those who have succeeded in the practice, know that business is not at all about “offering a good service at a good price.” It is about offering a service or product people will buy at the highest price they will buy it for. 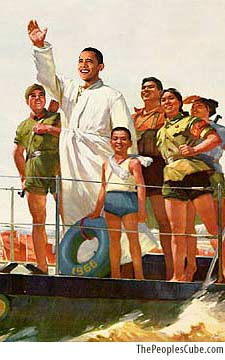 Capitalism is not an easy game. People get hurt. There are winners and losers.

No one thinks that people should be horribly ripped off or deceived. That’s why there is the need for some amount of regulation. But if your operating priniciple is for the government to reward   “a good service for a good price,” well, welcome to the Soviet Union.

What else were the commissars trying to do? There is of course capitalism within a Communist society. It’s just that the state runs it, in an effort – a vain one, as history has shown – to get good products to people at good prices.

I’m not saying Obama is a Communist or even a Socialist. I am saying that this man who regularly bashes companies for succeeding a little too well for his taste has a poor conception of what the market economy is all about.

Especially since he never participated in it, unless you count writing books.

I can empathize. When I was in college, some friends and I used to wash windows during the summer. I would always object to the high prices they were trying to charge people. They couldn’t understand what I was bitching about and didn’t want me giving people estimates by myself.

That’s why I went into journalism instead of business. Because they were right.