Faced with sluggish job growth, the resumption home price declines, and the possibility of a double dip recession, President Barack Obama gave his economic team the finger at a White House meeting last Thursday, just before departing for a vacation on Martha’s Vineyard.

“You guys suck,” Obama declared as his economic team gave him the latest dose of bad economic news. “Malia and Sasha could do better than you two bozos.” 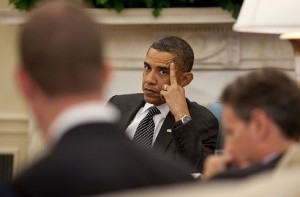 A photograph obtained by White House Dossier shows the exact moment Obama gave his economic advisers the ultimate diss, during a meeting in the Roosevelt Room. The picture, seen at the left, shows Obama flipping them the bird.  Geithner is seen on the right, weeping into his hand.

Summers, who had to be awakened in order to receive his scolding, asked the president, “What are you going to do?” When the Obama replied, “I may have to kick your ass,” Summers immediately stood up and ran from the room.

Asked for Comment, former BP CEO Tony Hayward, who last spring had his ass kicked by Obama, commented, “Larry did a smart thing. I’m still having trouble sitting down.”

Geithner protested that the stagnant economy was Bush’s fault. But Obama said the days of blaming Bush for the economy had to come to an end.

“We’re having foreign policy problems, and I may have to start blaming Bush for the growing violence in Iraq and the possible failure of the Afghanistan offensive,” Obama said. “I’m also planning on blaming him for the our inability to get a Mideast peace deal and the Iranian nuclear weapon. You econ guys have been getting a free ride for too long. It’s time to start letting someone else share the blame with Bush.”

“Can’t we blame Cheney for some of the foreign policy stuff?” Geithner pleaded.

“We’re going to blame Cheney for Gitmo still being open,” Obama replied. “But he just got out of the hospital, so our capacity for blaming him is limited right now.”

Reached for comment, Boehner said the finger was the least Summers and Geithner deserved. “I personally think they should be sent to a Chinese labor camp and have their ears cut off and fed to pandas,” Boehner said. “But a simple firing will do.

“These guys are amateurs,” Boehner continued. “How much have they run up the deficit, a couple of trill? We ran it up like eight trillion. They are completely ineffective.”

When reminded that deficits are bad, Boehner was quickly escorted from the room mumbling, “My shoes, my shoes, has anyone seen my shoes?”

As Geithner trembled in his seat, Obama told him, “Don’t worry Tim, I’m not going to kick your ass.”

“Rahm is going to kick your ass.”

At which point White House Chief of Staff Rahm Emanuel ran from his office, burst into the Roosevelt Room, pirouetted across the floor and performed a series of grand battements onto Geithner’s posterior.