President Obama is beginning to open himself up the the charge that he is using his children for political gain, and he should foreclose the possibility as soon as possible.

I myself wouldn’t level the charge yet. But if we keep seeing the girls in pictures and having them otherwise invoked, they risk becoming grist for the awful political meat grinder that is the modern media. 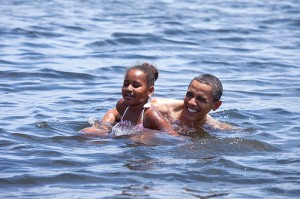 The White House has been releasing photos of the family together, or making them available for picture taking, most significantly a shot of President Obama swimming in the Gulf with daughter Sasha. The Gulf photo had symbolic and political significance because it showed Obama defying the oil spill.

And the president brought Malia into the press conference he staged this spring to try to rebut criticism that he cared insufficiently about the Gulf, using her question, “Did you plug the hole yet daddy?” to demonstrate how much the matter is bothering him.

The Bush’s and the Clinton’s studiously kept their children away from the spotlight, and their girls as a result were not part of the political discussion and mostly avoided scrutiny. One significant exception was the famous placement of Chelsea between her father and mother as the trio walked to the chopper following Clinton’s testimony before Kenneth Starr.

There’s precedent for using adorable children like the Obamas’ for political effect. President Kennedy is said to have been eager to have the public see photographs of him and his kids, though Jackie was hostile to the idea. Kennedy, at least once, waited until Jackie was safely out of town before inviting his photographer in for some pics of him, John and Caroline.

Obama is open to the charge of politicizing Sasha and Malia because they would so evidently be useful to him.  The Hope and Change candidate has evolved into someone who seems much more stiff and distant as president, and putting the kids in the picture warms him up.

Having young kids, it’s only natural that the Obamas will be seen with them. But the more they are actively made a presence, the more White House reporters and photographers will kick back against requests to leave them alone.

I’m certain the Obamas want to protect their children from the searing spotlight under which they’ve foisted them. The best protection would be to do more to keep them out of it.

← Laura and Michelle, Together at Last
My Latest POLITICO Article →

5 Responses to Get the Girls Out of the Picture