Did Gibbs Back the Ground Zero Mosque?

I’m not sure. Why don’t you be the judge. Here’s the exchange from yesterday’s briefing.

Q    There’s a debate that’s taking place in New York City whether or not it’s appropriate to build a mosque, an Islamic cultural center, near the site of Ground Zero.  What is the administration’s position on this?

MR. GIBBS:  Suzanne, I’ve been asked about this a couple times.  I think this is rightly a matter for New York City and the local community to decide.

Q    The President takes a position on religious freedom, on tolerance.  Why wouldn’t the administration weigh in on this?

MR. GIBBS:  Well, I think we have — I think you’ve heard this administration and the last administration talk about the fact that we are not at war with a religion but with an idea that has corrupted a religion.  But, that having been said, I’m not from here going to get involved in local decision-making like that.

Q    Do you think the Anti-Defamation League has a correct point of view in saying, out of the sensitivity to some of the victims of 9/11, it’s not appropriate?

MR. GIBBS:  Suzanne, again, I think it is a decision that is appropriately debated at the local level.

Now, he appears to be staying completely out of the thing. But you notice he mentions, “we are not at war with a religion but with an idea that has corrupted a religion.” In the context of a discussion of the Ground Zero mosque, this could be taken as a signal that the White House does not have a problem with building a mosque there because the president has nothing against a religion, Islam.

Normally, when Gibbs wants to stay out of something, he is careful not to include comments that could be construed as offering an opinion. In this case, either Gibbs felt he could not pass on expressing Obama’s view on “tolerance” once the subject was broached, or he found a subtle way to signal that the administration backs the project. 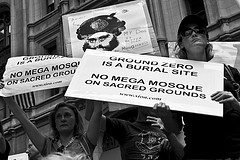 Given the extraordinary steps the ruling class in New York City has taken to be politically correct and supportive of this enterprise, it’s doubtful that their counterparts in Washington and the White House differ with them.

Anyway, Obama must take a stand and not slink pusillanimously into the background

Why is the president suddenly reticent to comment on local issues? He was quite direct in expressing his feelings about Arizona’s “misguided” immigration law. Is he not involved in local issues every time he comes to campaign for a candidate?

But moreover, since when did Ground Zero become merely a “local issue?” The building of a mosque designed to loom over hallowed U.S. ground is a matter that has, quite properly, emotionally engaged the entire nation.

We need to hear what the president thinks.

6 thoughts on “Did Gibbs Back the Ground Zero Mosque?”