The news that Obama will Yenta it up on “The View” Thursday – the show will be taped Wednesday afternoon – is the final step in what must be a master plan by a Republican plant in the White House to diminish the president and the presidency.

Obama’s self-debasement has been a sustained and aggressively implemented project.

We’ve all seen our president lay himself low on the world stage, bowing to the feudal Saudi ruler, coddling tyrants like Chavez and Ahmadinejad, and offering up petty slights to our allies. 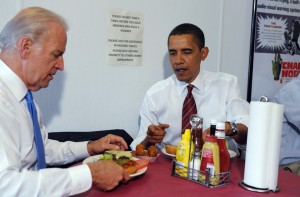 But the central thrust of the diminishment campaign has been waged here at home. The centerpiece is his stilted effort at populism and regular-guyism, which is cataloged and analyzed in the current Weekly Standard.

Obama is basically kind of a stiff intellectual who can inspire when he takes the stage, and he shouldn’t run from it. Jack Kennedy didn’t pretend not to be an elitist product of wealth and Harvard, and he is nevertheless one of our most revered presidents. Obama should continue to project the image of the dignified, eloquent visionary, the profile he rode into office. 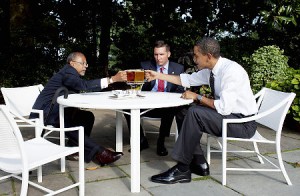 Instead, we have him mulling aloud “whose ass to kick,” deriding “fat cats,” engaging in rank partisanship and making other forays into the prosaic that merely serve to vividly emphasize his protean character. This is a man who doesn’t mind being presented as something he’s not, and we should all be concerned.

Richard Nixon once appeared on Sixties comedy show “Laugh-In,” some will remember, and recited the then-hip phrase “Sock it to me.” But even the ill-at-ease Nixon wasn’t trying to be someone else. He knew, and the country knew, that the joke was on him. He was the ultimate four-cornered square.

But Obama will pretend he is small enough to match wits with Whoopi Goldberg. All to get a few votes from soccer moms stuck watching TV in the interregnum between dropping their kids at school and their 11:30 am spin class.

4 Responses to Obama on Full View