Obama: 48 Hours of Golf Since March

Former President George W. Bush was fed a steady diet of insults for liking to take it easy. And while the guy started work at like 6 am and left 12 hours later, boy, if you got in his way while he was on vacation, look out. The halting initial response to Katrina was due in part to the fact that it hit New Orleans while the prez was trying to log some time on the ranch in Crawford.

So we think it’s only right to take a look at Obama’s time on the golf course. So far, just this spring, the president has spent about 48 hours golfing – including time taken to get to and from the White House. That’s six eight hour work days marching up and down the links since March. It seems fair to say that if Bush were up to this amount of relaxation, he’d have his hands full with bad press. 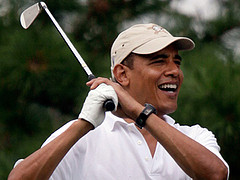 Now, we at White House Dossier don’t begrudge a president his down time. It’s stressful, as one White House adviser put it to me in all seriousness recently, trying to “change the world one day at a time.” But what about something less time consuming, like a game of backgammon? Or nine holes instead of the eighteen Obama almost always puts in? And the golf time is in addition to basketball, the gym, and other stress reduction techniques employed by the commander in chief.

The spring golfing season kicked off April 3 with a trip to Fort Belvoir which, along with the course at Andrews Air Force Base, is one of two Obama generally frequents. He then played on each of the next three weekends – FOUR WEEKENDS IN A ROW – including back to back sessions April 23 and 24 while on vacation at the Grove Park Resort & Spa in Asheville, NC.

Would your wife let you golf four weekends in a row?

Obama maintained his torrid pace in May, golfing on the 15th, the 22nd, and the 29th.

It doesn’t matter how hot or humid it is either, Obama goes. On June 19, he dragged the 67 year old Vice President Biden onto the course for a sweltering 18 holes, calling into question whether he was trying commit murder-by-golf in order to free the 2012 VP slot up for Hillary. 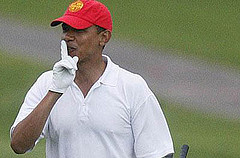 While playing, Obama for the most part likes to keep it light. No deep discussions of policy on the links. One of his companions on nearly every outing is Marvin Nicholson, the affable, very tall, White House trip director. Nicholson a former  “body man” to Sen. John Kerry (D-Mass.), is the perfect guy for getting away from it all, having worked as a golf caddy, a bartender, and in a windsurfing shop – where he met Kerry. Also generally on hand is White House photographer David Katz.

Emphatically not invited are members of Congress or, in general, senior White House aides.

Sadly for Obama, the outing with Biden was the only one in June. With the Gulf of Mexico slowly becoming the new U.S. Strategic Petroleum Reserve, White House image counselors appear to think the golf needs scaling back.

Which might just be a part of why Obama is so pissed at BP.

But he’s back with one session already logged this month, a four hour outing July 4.

1 thought on “Obama: 48 Hours of Golf Since March”

President Trump is at the White House. He has no publicly scheduled events.