President Obama today was asked about something that has been freaking out some on the right for about two years now – that is, why it is he mentioned during the campaign that there should be a “civilian national security force” and just what the Hell did he mean by it.

The concern, of course, is that Obama wants to amass a force of truncheon-wielding Brown Shirts and, after denying the people their right to firearms, beat on his opponents but good.

Here’s what the president said during a July 2, 2008  rally in Colorado

Now, let’s say this, it does sound a little weird. But he didn’t repeat it and there’s been no sign of a revivified Ernst Rohm goose stepping around the White House grounds and chucking books into bonfires.

Sure, Obama is eagerly growing government power, and the existence of a millions-strong political movement loyal to a single man – Organizing for America, formerly Obama for America – gives me goosebumps sometimes. But it’s pretty clear what he meant two years ago was that he wants some civilian backup for military operations.

Here’s the question he got today:

I had heard something and read about it on the Internet – you wanted the civilians to be just as strong and well-funded as our military. What are your plans to go about constructing that?

This seems a clear reference to July 2008 remarks, which you can “read about it on the Internet” in all sorts of places. By the non-defensive tone of his response Obama does not appear to be aware of the ruckus on right his campaign statement roused. But here he pretty well explains that he’s trying to take the load of the military, not assemble a band of storm troopers.

So what I’m trying to say is, don’t put all the burden on the military. Make sure that we’ve got a civilian expeditionary force that when we go out into some village somewhere and the military makes it secure, let’s have that agricultural specialist right there. Let’s have that person who knows how to train a police force right there. Let’s have all those personnel and let’s make sure that we are giving them the support that they need in order for us to be successful on our mission.

This “civilian expeditionary force” is already being played up even in the mainstream press as big news, but it’s not. Just a few days after taking office, the Defense Department started just such a program with just such a name. 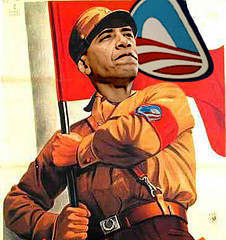 Obama during the campaign also called for a “Homeland Security Corps” to help communities prepare for catastrophes, and today we have in DHS what’s known as the Citizens Corps. Sound spooky? Well, it was started by Bush.