In an startling sign of the growing frustration in the military with President Obama, Afghanistan war commander Gen. Stanley McChrystal and his aides are portrayed in an upcoming piece in Rolling Stone as openly derogatory toward senior administration political appointees.

The revelation of the article, titled “The Runaway General,” comes just a week after war theater commander Gen. David Petraeus hedged on the July 2011 date that the White House wants to begin withdrawing from Afghanistan. 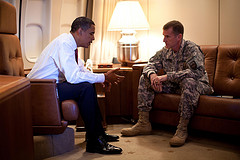 McChrystal, who has been summoned to the White House to explain the article, complains that Obama was unprepared and apparently intimidated by his own generals during their first meeting. He is disdainful of Ambassador Karl Eikenberry, whom he accuses of engaging in a CYA operation by questioning the wisdom of moving forward with Karzai in charge, saying Eikenberry could later say “I told you so” and look good in the history books

One McChrystal’s aides calls national security adviser James L. Jones a “clown,” and another refers to Vice President Biden as “bite me.” Biden opposed the surge of troops in Afghanistan and is a big supporter of a rapid draw down beginning next summer. McChrystal at one point says he can’t bear to open another email from Richard Holbrooke, special envoy to Afghanistan and Pakistan.

Many will wonder what McChrystal could possibly have been thinking when he agreed to have someone working for Rolling Stone follow him around and apparently accompany him to bars and hang out during unguarded moments. But it shouldn’t take a degree in Freudian psychology to understand the hidden motivation: McChrystal is contemptuous of  Obama and his advisers, and the attitude is so pervasive among senior military staff that they hardly notice it’s a problem.

Late last night, McChrystal moved to save his job.

I extend my sincerest apology for this profile,” he said. “It was a mistake reflecting poor judgment and should never have happened. Throughout my career, I have lived by the principles of personal honor and professional integrity. What is reflected in this article falls far short of that standard.”

I have enormous respect and admiration for President Obama and his national security team, and for the civilian leaders and troops fighting this war and I remain committed to ensuring its successful outcome.

But it’s unclear if this will work. The apology, you’ll notice, doesn’t take anything back that was said. Already some, including MSNBC host Joe Scarborough, are calling the article insubordination. It’s possible Obama will move to have his own “Truman fires McArthur” moment. With the president looking pretty soft on foreign policy and his conduct of the war, White House officials might calculate that such a move would provide a nice little political boost.

But what a mistake it would be. McChrystal is widely viewed as a superb military strategist whose acumen is crucial for the Afghan effort.  This is not insubordination a la McArthur – he has not refused to obey commands and is not questioning specific policies. Indeed, McChrystal has saluted and accepted the withdrawal startup date, which everyone in the military thinks is a dumb ass idea.

If Obama fires McChrystal mainly to show his cojones, it will be a true disgrace. A trip to the woodshed and a stern warning not to do it again are in order. Magnanimity will gain Obama more respect than firing him.