In a rare coup for such a new website, White House Dossier has scored its first major scoop, and it’s a huge one. White House Dossier, through unnamed, highly placed sources who are also close to the issue, has procured the new draft of the Iran nuclear sanctions agreed to by the United States, Russia and China. These sources spoke on condition of anonymity to avoid having their asses immediately fired.

“These are tough, tough, – dare I say brutal – sanctions that will force Iran to think twice, and possibly even three or four times – OK, not four times but definitely at least twice – before building a nuclear weapon,” said Secretary of State Hillary Clinton in an exclusive interview. “This is awesome.”

The following are the key provisions of a document that will be considered Friday at an emergency meeting of the UN Security Council in New York:

2. Lebanese kabobs will be declared superior to Iranian kabobs.

3. Persian carpets will hereby be known internationally as “Freedom Rugs.”

4. The song “I Ran” by Flock of Seaguls will henceforth be played at all international sporting events in which Iranian athletes are awarded the gold medal.

Reaction from the Iranian leadership was mixed.

“I don’t know, I really hate Flock of Seaguls. Do we really need these nuclear weapons?”

White House Dossier has learned that to gain Russian’s acquiescence in the deal, Hillary Clinton, in a startling acknowledgment that the administration’s new posture toward Moscow had failed to turn Russia’s leaders into reasonable people, met secretly with Foreign Minister Sergei Lavrov last week at the Kremlin. There, Clinton and Lavrov pressed the Reset Button AGAIN.

With the reset button – which for an awkward 20 seconds was stuck in the down position before popping back up – having been re-pressed, the Russians were ready to deal. 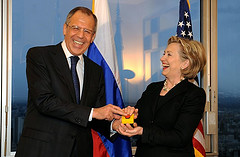 (While it may have helped that “reset” was this time mistranslated into Russian as “Screw the nation of  Georgia,” State Department officials say the error was entirely the result of bureaucratic bumbling.)

Hu was clearly pleased, but maintained his strong negotiating stance by referencing the U.S. position as debtor and supplicant to China. “We’ve got you by the balls,” he told Clinton, adding, “Well, not you specifically.”

Noting that the United States was seven days late on its last payment – two days past the five day grace period – Hu threatened to jack up the rate to 19.8 percent and assess a $40 fine – for every $10 of debt.

Nevertheless, State Department officials say the new sanctions represent a major setback for Iran and a victory for the cause of nonproliferation to countries that would gladly give terrorists nuclear weapons to set off in Times Square.