President Millard Fillmore (1850-1853) had taken a lot of crap over the years, but his reputation sunk to a new low today when President Barack Obama put the blame squarely on his administration for the disastrous oil spill in the Gulf of Mexico.

“Oil drilling has been going on in the gulf, including deepwater, for quite some time,” Obama said during an White House Prime Time (in Egypt) East Room Press Conference. The drilling, Obama suggested, was something Millard Fillmore started, not Obama

The president lamented that Interior Secretary Roger Salazar had been trying to clean up the fetid legacy of Millard Fillmore, but that all the scrubbing had yet to erase it.

“When Secretary Salazar took office, he found a Minerals and Management Service that had been plagued by corruption for years,” Obama said. “This was the agency charged with not only providing permits but also enforcing laws governing oil drilling. And the corruption was underscored by a recent inspector general’s report that covered activity which occurred prior to 2007, a report that can only be described as appalling.”

Obama said “Salazar immediately took steps to clean up that corruption,” adding that, “For years there’s been a scandalously close relationship between oil companies and the agency that regulates them.” 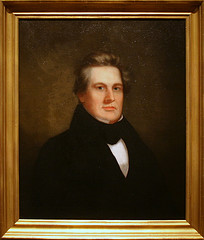 “Congress mandated that only 30 days could be allocated before a yes or no answer was given,” Obama complained. “That was by law, so MMS’s hands were tied.”

An Obama aide later noted that instead of asking Congress to change the law, administration officials simply through their hands in the air and said, “oh WELL.”

Obama unveiled several new steps to address the problem, including formation of the National Commission to Find Out How Millard Fillmore Could Have Completely Screwed This up.

“The purpose of this commission is to consider both the root causes of the disaster,” Obama said. The roots presumably predate the Obama administration, which is kind of like the plant on the surface, you see?

Obama ended the press conference calling for everyone to do the Macarena, prompting stunned looks on the faces of reporters in the East Room. But several then loosened up, saying “Hey, why not,” and started performing the 90’s dance fave.